I was going to make the content of this image my quote of the day because of the application to I-1639: 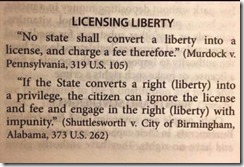 “No state shall convert a liberty into a license, and charge a fee therefore.”

Unfortunately, as near as I can tell, neither ruling contains the word “convert”. There are some phrases that one might extrapolate to what is seen above, but they are extrapolations.

Here is the phrase in MURDOCK v. PENNSYLVANIA (CITY OF JEANNETTE) which I found to be the best fit:

A state may not impose a charge for the enjoyment of a right granted by the Federal Constitution.

“It is settled by a long line of recent decisions of this Court that an ordinance which, like this one, makes the peaceful enjoyment of freedoms which the Constitution guarantees contingent upon the uncontrolled will of an official – as by requiring a permit or license which may be granted or withheld in the discretion of such official – is an unconstitutional censorship or prior restraint upon the enjoyment of those freedoms.” Staub v. Baxley, 355 U.S. 313, 322 . And our decisions have made clear that a person faced with such an unconstitutional licensing law may ignore it and engage with impunity in the exercise of the right of free expression for which the law purports to require a license.

Hence, I would like to suggest people not use the “quote” which has been circulating for some time now. Use an exact quote from the actual cases so you won’t get drawn into a debate over the meaning of the words you used versus what the courts actually said.

The actual words should be strong enough to make the case for our rights to be free of licensing restrictions. This practice should actually be far more effective since it avoids the deflection made possible by using words not actually found in case law.

9 thoughts on “Quote of the day—On licensing a right”