I mentioned the other day that I tried out some 180 grain Hornady Action Pistol (HAP) bullets. In one test of a 20 shot group they gave me better accuracy that any pistol bullet I can recall. I usually shoot a six shot group and “on a good day” get about a 1.5 inch group with the same load with 180 grain Montana JHPs. Using the group calculation feature of Modern Ballistics I converting the 20 shot group into the equivalent six shot group and got 1.26 inches. Hence HAP does appear to be have significantly better accuracy. I’ll shoot some more groups just for fun sometime, but the accuracy criterion for switching bullets, all other things being equal is “nearly as good” as the Montana Gold JHP. It more than meets this criterion.

I also measured the weight variation of the bullets. This is rather important because it can affect whether your ammo will “make major” power factor at USPSA matches. If the chrono man pulls a light bullet or two to compute your power factor you could end up shooting minor power factor.

The extreme spread on the weight distribution would make a different of about +/- 0.44. This isn’t a big deal.

180 grain Montana Gold JHP have a tighter weight distribution but this is much better than what I measured with 180 grain .401 bullets from Black Bullet International.

The weight distribution is acceptable to me.

I loaded all 500 bullets and found something a little irritating: 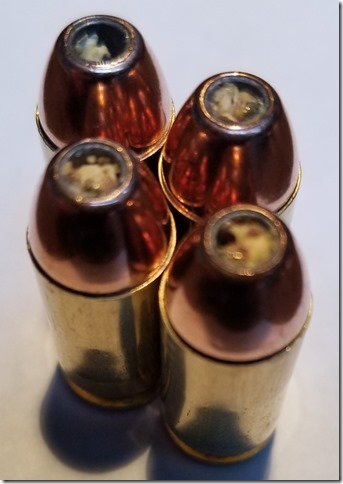 Five (only four shown here) of the bullets had the hollow point clogged with what looked like cleaning media, perhaps ground corn cobs. It was easy to remove the foreign material from the bullets but I have never seen this in the 120K+ rounds I have reloaded. It’s not a big deal but I was surprised they would have a process which would allow this to be possible.

Overall their bullets meet my criteria even though they are a little more expensive than the Montana Gold I am currently using. I am switching bullets because they told New York they would not knowingly sell products to them.