I reloaded 3,300 rounds of .40 S&W last month. 3,206 of those rounds were 180 grain Montana Gold JHP to be used for practice at indoor ranges. 94 rounds were 180 grain Hornady Action Pistol (HAP) bullets. The HAPs were those I ordered last May in response to the President of Hornady Manufacturing Company saying they would not knowingly allow their ammunition to be sold to the Government of the State of NY or any NY agencies.

Yesterday I tested the HAP rounds and found they were nearly identical in the mean standard deviation of the velocity for the same powder charge as what I get with the Montana Gold JHP. The accuracy appears to be better. Here is a 20 round group at 30 feet (1.75” of which some of the error was surely mine): 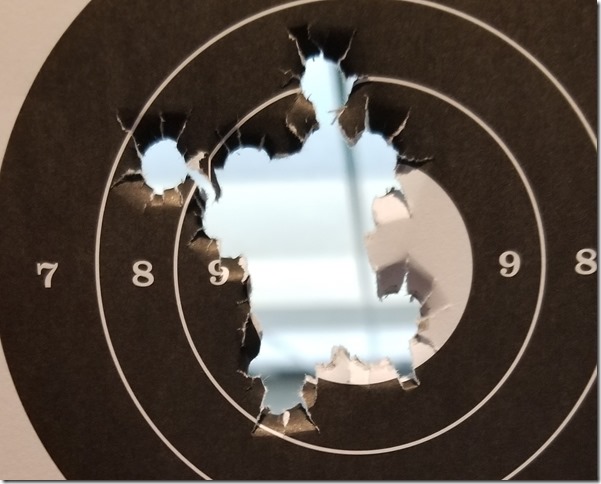 This is by far the most number of rounds I have reloaded in a single month all year. And taking into consideration that I used a lot of my “reloading time” to install and get a new reloading press set up I’m very pleased. I also spent a fair amount of time individually checking the length of about 2,300 cartridges which had the potential to have a double charge which blew up my STI DVC Limited. No double charges found so far but I have about another 2000 rounds to go.

I purchased the Dillon XL650 mostly because of the powder check stage. This gives a buzzer warning if there is no powder or a double charge in a case. This should prevent another blown up gun. A bonus is that the new press with the automatic case feeder gives me almost double the production rate of the Dillon 550B press. This is why I was able to get so many rounds out this month.

Also, if you are a reloader, get the LED lights for your press. They give you a much better view of what you are doing:

The picture above is of both presses with only the press lights on. With room lights on as well the reloading area is exceptionally well lit which makes it easier to see if something is a little off.

This brings the rounds year to date to 12,228. With the new press it should be pretty easily to meet my goal of getting to 16K by the end of the year. I may even exceed my previous best year of 23,356.

5 thoughts on “Rounds in the last month”