As an electrical engineer specializing in communications I have a certain bias when I hear the word “wireless”. The “Internet of Things” and the involvement of those sort of things in home security is a big thing these days. Because of the surprise of context switch with this image I received from Rolf a while back I thought it was very funny: 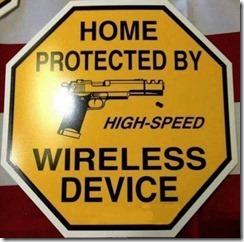