The gun control debate was settled…in 1791. 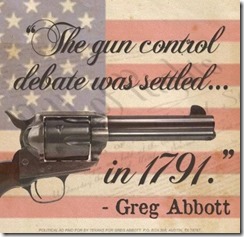 [It may have been settled then but that didn’t mean it wouldn’t became an issue years later. And with the return of the debate we, of course, now have massive infringements of our natural and constitutionally protected right to keep and bear arms.

Still, it’s a decent response to gun controls advocates. Tell them the issue is settled and, “Your move. Are you volunteering to take them away from anyone?—Joe]

3 thoughts on “Quote of the day—Greg Abbott @GregAbbott_TX”