Kelsey recently joined my team at work. Like Caity, when she first joined the team full time, there was a minor flaw. Everyone else on our team knows how to shoot and enjoys guns. Kelsey is very quiet and difficult for me to read. I wasn’t sure whether to discuss this issue with her or not. Over the course of a few weeks it came out that she was interested in learning to shoot so I reserved the training bay for 12:00 –> 2:00 (they only do two hour blocks) today. It turned out our boss gave us all the afternoon off since we have to work part of Sunday this weekend so Kelsey and I weren’t rushed when we visited the range.

I started her out with a suppressed Ruger Mark III 22/45 with subsonic ammo at five yards. 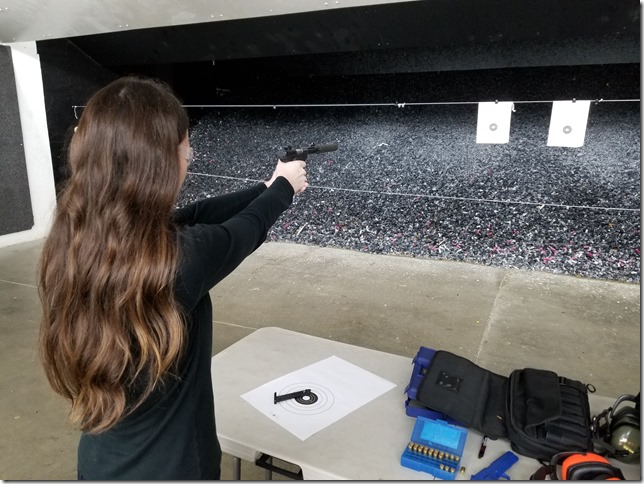 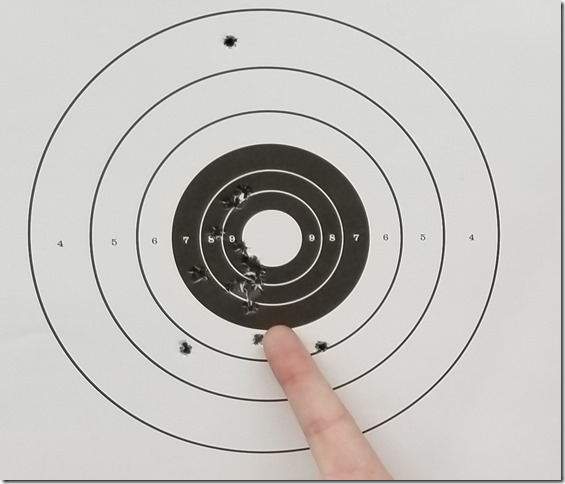 The first eight shots were the three at the bottom, and then a vertical hole of five shots you could cover with a nickel. The one wild shot at the top was near the end of the second magazine.

I had forgotten to tell her to keep the front sight in focus. We talked about that a bit and then she went on to a .22 revolver. I had her fire it single action with CCI CBs: 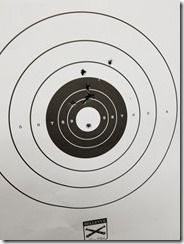 Okay, now a challenge, and the reason I seldom recommend revolvers. Shooting a revolver in double action mode:

Again, a couple wild shots near the end of the string. But the rest of the shots are really rocking it for a new shooter with any handgun, let alone a double action revolver. She learns fast!

I was amazed. This is 10 rounds at five yards: 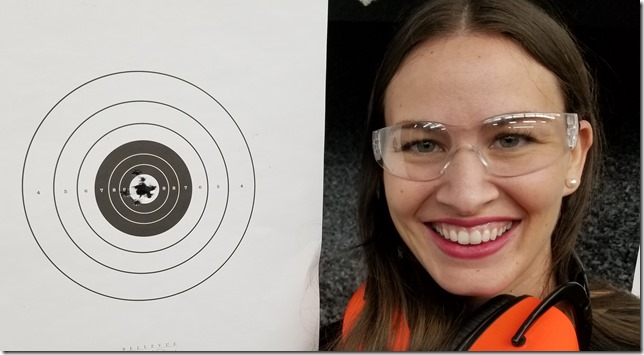 These were shots 37 through 46 in her entire life. She only once even held a gun in her hands before (so she says).

This is after 20 rounds: 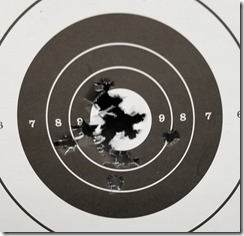 Okay. She’s a pro. There is nothing I can teach her about this type of shooting. We have to move on to something else. She is going to get bored putting so many bullets through a single hole.

I put up a paper with four bull’s-eye targets and told her to put one round on each bullseye. Keep it in the black or smaller, but shoot faster. She did a couple strings of five shots each. She shot quite a bit faster, but about half the bullets were in the 10 ring.

I told her she can go faster still, “Just keep them in the black. As soon as the sights are lined up somewhere within the black, squeeze off the last 20% of the trigger pull”. “Oh”, she replied, “I can do that.” And she did. Hmm… I need to push her more.

I pulled out the shot timer and went through the range commands with her: “1) Make ready. 2) Are you ready? 3) Standby…BEEP!” Got that? Good. Let’s try it.

And I finally pushed her into failure. With four shots, one bullet barely nicked the bottom of the paper, and one missed on the right side of the paper entirely. Ah! Now we have something I can teach her!

Shooting fast, particularly in competition, is a mind game. A little bit of stress can make everything fall apart. Don’t let the timer or the shooter next to you, with their own set of plates competing for the first to complete, affect how you shoot. You shoot your targets your way, just like you did in practice. Let’s try it again.

She got it. From the low ready she was able to get five shots into five targets (one of the targets twice) in six point something seconds. All her splits were less than a second.

We had used up all our range time so we cleaned up the range and as we returned to the lobby to wash up I asked her to walk slowly past the shooters in the next bay and look at the targets the other shooters were producing. I told her, “There won’t be any targets even close to what you did today”. I was right. There wasn’t a pattern on any of the targets I could have completely covered with both of my hands spread wide.

We went on to the lobby and I finished washing first. I grabbed her 20 round target and showed it to the range officer behind the counter. She was as amazed as I was and pulled up Kelsey’s profile in their database and made a note of something about “A legend has been reborn.”

Kelsey earned her new shooter smile and she is now a complete member of our team: 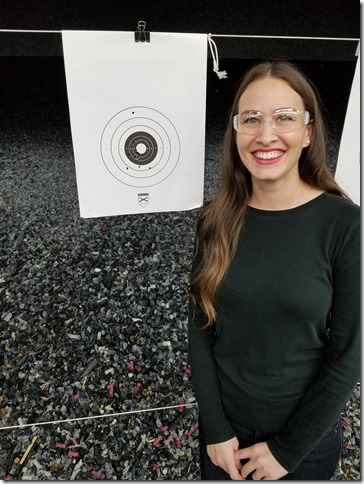