Almost a year ago I wrote my U.S. representative in Congress encouraging him to support concealed carry reciprocity. Here is his response: 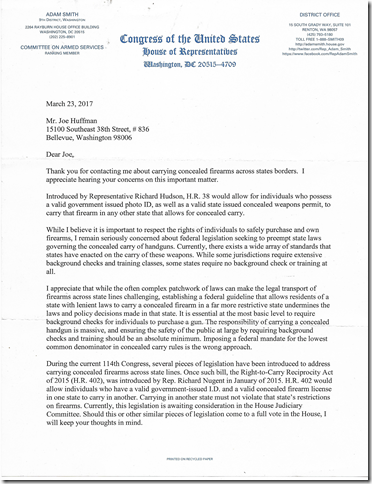 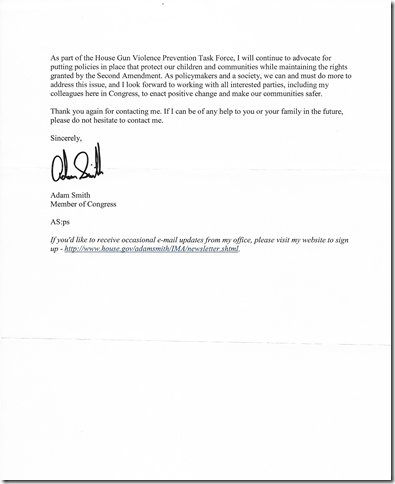 A couple of things stand out. The first is that he says:

The responsibility of carrying a concealed handgun is massive, and ensuring the safety of the public at large by requiring background checks and training should be an absolute minimum.

People who have a Washington State concealed pistol license, CPL as it is called in Washington, should see something jump out at them over this.

Washington State doesn’t have a training requirement. Hence, if this were a problem, Smith should be able to show that Washington State CPL holders have more firearm accidents or engage in more illegal shootings than people from other states with a training requirement. No such data exists. Probably because it is so rare that such a thing happens.

I have to conclude that Smith was just rationalizing the decision he had already made.

I will continue to advocate for putting policies in place that protect our children and communities while maintaining the rights granted by the Second Amendment.

His opposition to reciprocity is for “the children”! How many children in this country are shot each year by people with concealed carry licenses? My guess it is very close to zero. I’ve never heard of it happening. And I’m pretty sure the anti-gun people would make sure the mainstream media know about it. The same goes for someone with a concealed carry license shooting up a community. It has to be very rare. The data shows that, in Texas, compared to the police they are 10 times less likely to commit a misdemeanor or felon and over seven times less likely to commit a firearms violation of some sort. Other states show similar low rates.

Again, this has to be rationalization for his decision rather than rational thought to arrive at a decision.

“Granted by the Second Amendment”? This is a common “misunderstanding” but I expect my representatives in Congress to be informed. My guess is that there is a good chance this was deliberate rather than ignorance. It should be clear if you actually read the Second Amendment that it references a preexisting right rather than granting a right. This was made all the more clear in U S v Cruikshank:

The right there specified is that of ‘bearing arms for a lawful purpose.’ This is not a right granted by the Constitution. Neither is it in any manner dependent upon that instrument for its existence. The second amendment declares that it shall not be infringed…

It is long past time for me to start educating my representative.

Update: I sent him an email:

In a letter you sent me on March 17th of last year you made claims which are not supported by, and/or are contrary to, the available evidence regarding people with licenses to carry concealed firearms and the Second Amendment. The full details are in my blog post here: http://blog.joehuffman.org/2018/01/28/representative-adam-smith-on-reciprocity. The short version is that since Washington State does not require training for a concealed pistol license those opposed to reciprocity between states regarding licenses and claiming training “should be an absolute minimum” should also be able to point to evidence showing Washington State concealed pistol license holders are more prone to misuse of their firearms. To my knowledge no such evidence exists.

Furthermore using this criteria to oppose the law adversely affects the civil rights of residents of Washington State when they travel to states that will not issue licenses to Washington residents. Blocking reciprocity has a lesser impact on the rights of people of other states who can easily obtain Washington licenses for their travels to Washington State. You are acting against the interest of your own constituents by taking this stand.

Please read my blog post and reconsider your stance on this important civil rights issue.