About a month ago daughter Kim sent me a video of someone successfully making colored smoke bombs using “oil crayon”. I couldn’t find the type of crayons I think they were using in the video but I did find some cheap bulk crayons on Amazon and ordered them:

We know that if we put several pounds of colored powder on top of an exploding target it will disperse the powder into the air and give some color to the explosion. But it would be nice if the explosive itself also resulted in colored smoke. I also ordered some colored corn starch powder from Amazon which I thought also might be worth a try:

Last Saturday, December 16th, we melted the crayons in an electric skillet.

Then added the ammonium nitrate.

Then we mixed in the other ingredients to make Boomerite.

We also made a batch of Boomerite with a cup of the colored corn starch powder mixed in.

We then took the targets out for testing. None of the targets resulted in any colored smoke.

I knew the additional ingredients would make detonation harder so I used 50 grain VMAX ammo in a .223 rifle with a 24 inch barrel to get the best velocity and expansion for a better chance of detonation. All the targets hit with these bullets, from 20 yards away, detonated. The velocity at the target was probably just over 3300 fps.

Hitting them with slower FMJ bullets, as fast as 3200 fps, just punched holes in the target. A slower expanding bullet once resulted in a small pop which destroyed the target.

Although we didn’t get any colored smoke we did manage to blast away quite a bit of the little berm we were shooting into. In the picture below the small mound of dirt the target is sitting on use to extend parallel to the target across where the crater is now. 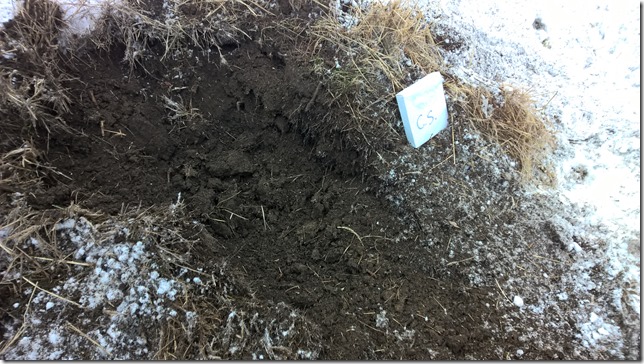