We often notice anti-gun people have problems understanding numbers, arithmetic is beyond them and math is totally alien. Last weekend I came across some numbers that, while simple and illuminating, would scare the crap out of them if they could only comprehend them.

I was at the WWII museum in New Orleans and took this picture of a wall: 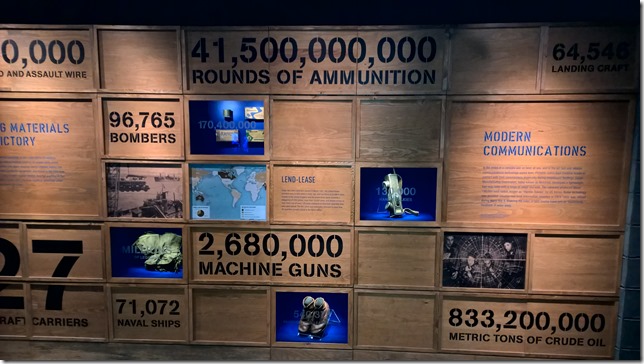 The numbers shown are the total number of items produced by the U.S. for use in World War II.

That should give them the chills, if they understood numbers.

There is another number on that wall of even greater interest and applicability to the discussion they don’t want to have. The U.S. produced 41,500,000,000 rounds of ammunition for the military in WWII. A typical year of U.S. civilian consumption is on the order of 10->12 billion rounds. Hence, during the nearly four years the U.S. was actively fighting the Axis powers, on average, they used about the same number of rounds each year that U.S. civilians use recreationally each year. Tell your anti-gun antagonist we use as much ammunition each year practicing for the next civil war as the U.S. used each year in fighting WWII.

See also my Boots on the ground post for more numbers of interest.

Too bad the antigun people don’t really understand numbers. If they did they would probably just curly up into a fetal position and whimper instead of annoying us. In the mean time, just tell them molṑn labé and then carry on as usual.

11 thoughts on “Too bad they don’t understand numbers”