The cruise Barb and I went on is called a “repositioning cruise”. During the summer the ship was based in Seattle and was making trips to Alaska. In September it was sailed to Los Angeles, we and a couple thousand other people boarded, and we then made a few stops in Mexico, a stop in Costa Rica, passed through the Panama Canal (the main draw for us), a stop in Columbia, and finally we got off in New Orleans. In between the days at port in the various countries and the passage through the canal there are many days at sea. Land is generally 100+ miles away, completely out of sight, and time aboard the ship can be a little bit boring. The crew and ship does provide some entertainment. There is tennis, rock climbing, swimming, basketball, a library, live music, live comedy shows, movies, bingo, chess, bridge, shuffleboard, and classes on various things like “Advanced Napkin Folding” (seriously!).

Yeah, things can get more than a little boring unless to put a little effort into it.

Since the ship was in the tropics the air was warm and the pool area was quite popular and they held other activities there. One of the activities was a “Mr. Sexy Legs” contest. Barb asked me if I was going to participate. I didn’t really feel comfortable doing this but Barb sort of nudged me a few times anyway. I decided no, I wasn’t going to do it and she dropped it.

The afternoon of the Mr. Sexy Legs contest I was on the deck above and aft of the pool far enough away that I could read without the noise disturbing me. Barb was exercising or something and was going to join me soon.

As I was reading I heard the cruise director repeatedly call for people to participate in the Mister Sexy Legs contest. It sounded as if they were having trouble getting enough guys to participate. No surprise, I thought. Then I heard them announce, “Rick from Colorado”. Barb and I had met Rick and Dedra on the ship a few days earlier and this had to be him. If Rick can do this, so can I, I decided. So I rushed down and was the last contestant to enter.

It was a such a cliché, Joe, from Seattle, won the Mr. White Legs prize: 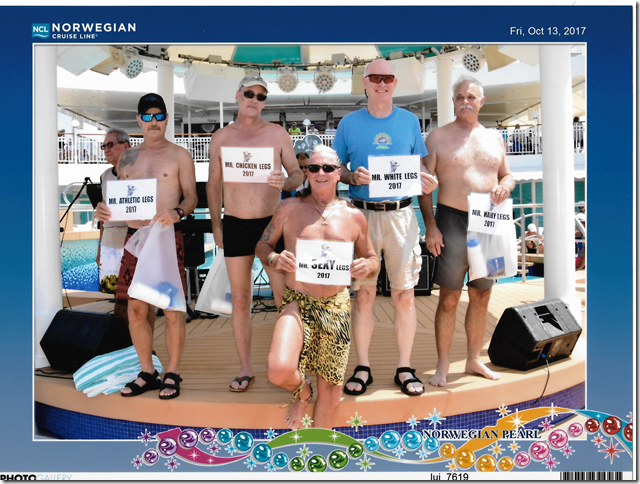 Barb was disappointed to have missed out on the show, but was thrilled Rick and I won prizes.

A few days later Barb had a plan for participating in the Miss Norwegian Pearl contest. She dressed for it and planned to least check it out at 1:00. We met some friends for lunch at 12:00 and the food was rather slow getting to our table. Our friends and I encouraged her to go on ahead or we could all take our food out to the pool area. But Barb didn’t really want to do that. We finished eating a few minutes after 1:00 and hurried to the pool area to watch the contest.

Barb didn’t want to go through with it but I saw the array of contestants and told her she would blow the competition away. There was absolutely no one in her class. She was still reluctant. I offered to walk up there with her and help her make a late entry. “Okay”, she finally agreed.

I was right about the outcome: 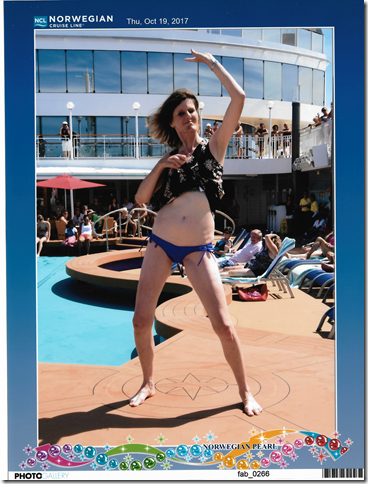 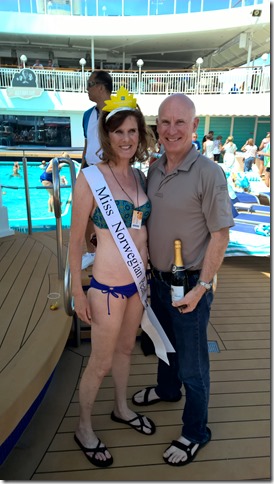 2 thoughts on “And the winners are…”