I’ve mentioned Black Bullet International before (and here, here, here, here, and here) and that I use them for outdoor USPSA matches. They give excellent accuracy, consistent velocity, and are a good price. I have reloaded 7563 rounds of ammunition using these bullets and have about another 875 on hand.

Earlier this month I ran into this:

I thought it was funny and set it aside.

This afternoon I opened a new box of Black Bullets which had been shipped many months after the last batch of bullets from them. I decided to weigh them to make sure they were essentially the same weight as the previous batch (important for making Power Factor for USPSA matches). I weighed 19 bullets and they were essentially the same as the previous batch:

When I weighed the 20th bullet I was shocked. It was 177.5 grains. This is over three grains below the mean of the other 19. This is significant enough to endanger “making major” at a match. Hmm…

I measured their diameter and length compared to typical bullets. The diameter was the same but the length was 0.005 less: 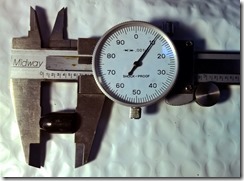 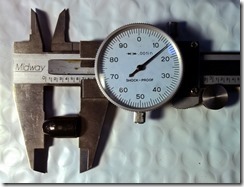 All the typical bullets were within 0.001” in length of one another. Then there were the two out of thirty which were 0.005” shorter.

Then I compared the stats of the Black Bullets to what I find typical of Montana Gold bullets:

Remember when Barb and I toured the Montana Gold factory Norm told us they keep the weight of their bullets to about +/- 0.3 grains? Yup, that matches my measurements of their bullets.

Now, I did once find a partial jacket in one of the Montana Gold boxes, but I have reloaded nearly 40,000 of their bullets. That is over five times as many as the Black Bullets.

I have to conclude that the Black Bullets International company is not as quality conscious as the Montana Gold Bullets company with 180 grain .40 caliber bullets.