In addition to attending the USPSA match in Idaho last weekend I did some maintenance on the Taj Mahal. When I was there on July 1st and 2nd there was a mouse nest inside the storage magazine: 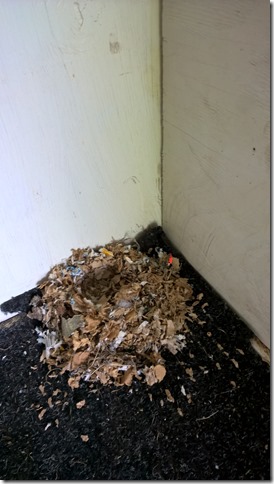 I removed it and cleaned the rest of the shed so when the ATF inspector arrived four weeks later it was clean and tidy: 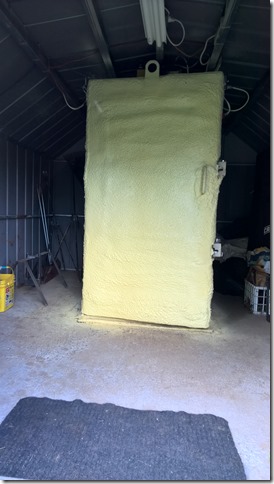 The inspection went fine even though there are a lot of Yellow Jackets and nests inside the shed.

The mice have a been a problem for years and have done a lot of damage. A couple weeks ago when I was walking through Home Depot with Barb I saw the spray foam insulation. I bought three cans and figured this will keep the mice out. I probably should have bought the version with a bitter additive which is specifically intended to keep pests out. But I didn’t know it existed and didn’t find out about it until I went looking on Amazon when writing this blog post.

So…. Saturday morning I moved almost everything out of the shed to get better access. As I removed stuff we had stored there I got better and better access to all the Yellow Jacket nests. I also had a spray which is supposed to kill flying insects and is non-toxic to humans and pets. I didn’t read the fine print before buying it and found out that for large stinging insects to use something a little different and still have the non-toxic feature. The spray I used would kill maybe one out of 20 Yellow Jackets. Maybe a third would go down it they were hit hard enough but then they would appear to rub it off for a minute or so then fly away. The rest just flew away with no apparent ill effects. But at least as I sprayed the nests and the area they left. I removed something like seven to ten nests and swept the floor and the area of the shed where the cracks were.

After applying the expanding foam insulation:

It’s not the neatest job, by far, but it is functional. The splatters on the roof are from when the spray foam insulation guys insulated the magazine two years ago.

At the base of the door to the magazine I put down a bead of the insulation, put a plastic garbage bag over it, then closed the door on it such that it would expand to fill the gap at the bottom of the door where the mice had to be getting in.

After it dried I opened the door, removed the plastic bag and we now have a near perfect seal at the bottom of the door. 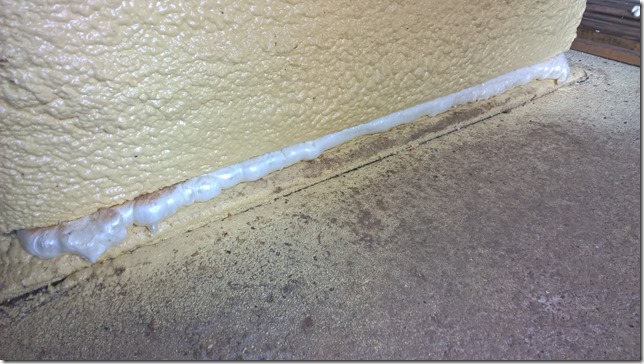 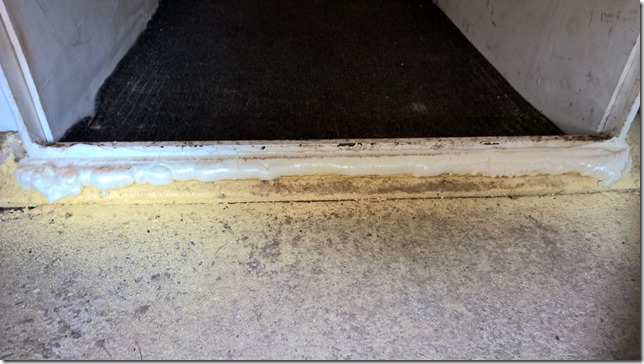 I’m certain this will block the mice from the magazine and I think I have them blocked from the shed as well. The Yellow Jackets can probably still find a way in around the shed door but their access is severely limited compared to what it was.

I threw away some stuff and rearranged the remainder for access in the order we remove it for Boomershoot: 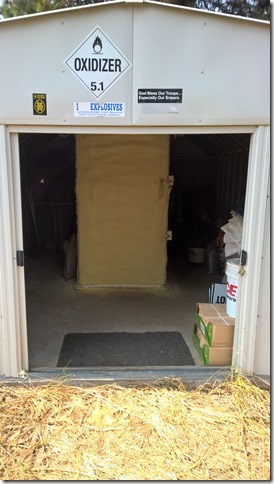