It is often said, and it is often true, that you get the best accuracy by, among other things, seating the bullet out close to the forcing cone, or rifling.

In a revolver there is a gap between the barrel and cylinder, and high pressure gas (or plasma) escapes through that gap. I’ve often heard of “gas cutting” of a modern, magnum revolver frame’s top strap just above the cylinder gap, but I’ve never heard of cylinder gap gas cutting of the bullet you seated way forward, nice and close to the forcing cone. 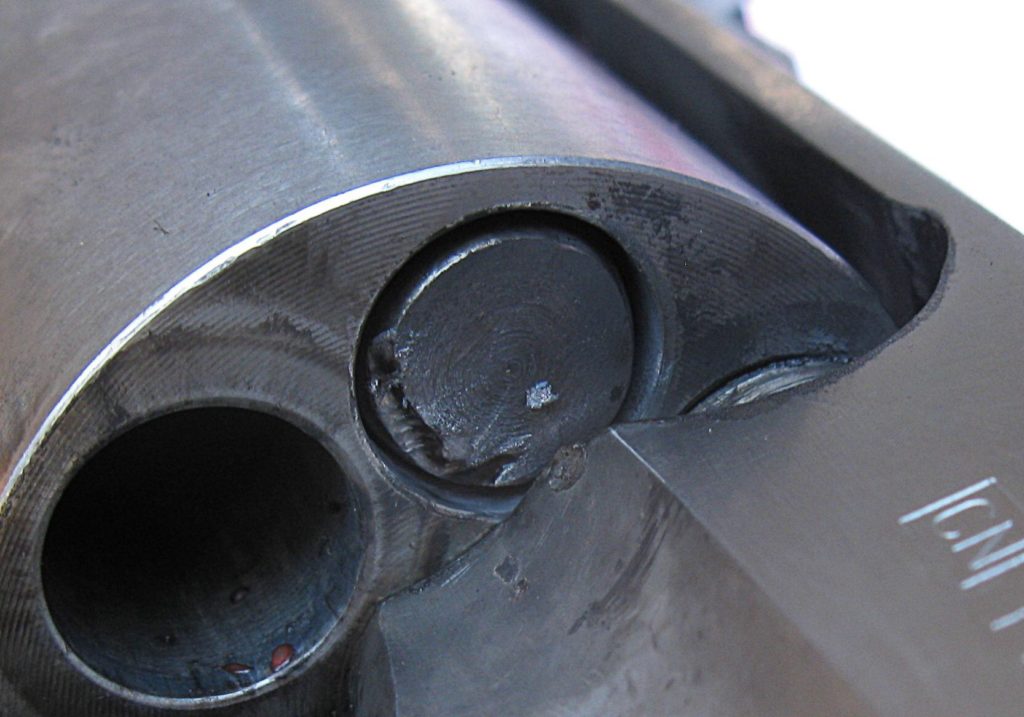 This gun is a “44” caliber (45 by current standards) percussion revolver. The fired chamber in the photo resulted in damage to the bullet noses in the adjacent chambers. Since accuracy depends, among other things, on the bullet’s center of mass being concentric with its spin axis, the damaged bullet is now out of balance and not likely to yield the best accuracy.

That is a soft, pure lead bullet in a black powder gun. Smokeless loads produce much higher peak pressure and typically use a correspondingly harder alloy bullet. I’ll assume that gas cutting of cast bullets in a modern revolver is roughly equally likely if the bullet is too close to the cylinder face.

Seating the same bullet only slightly farther back behind the cylinder face in the same gun resulted in no apparent gas cutting.

Another possible solution would be to load only every other chamber and seat the bullets as far out as you wish. For muzzleloader deer season in WA State (and others), a multi shot weapon can have only two chambers loaded anyway, with only one of the two primed, so the latter solution wouldn’t be any kind of compromise in firepower in that circumstance.

The reddish droplets you see in the fired chamber consist of bullet lube mixed with black powder fouling. It’s soft, and perfectly normal, and it’s evidence suggesting that the load is sufficiently lubed for fouling mitigation.

Anyway, those who load lead or powder coated lead bullets in modern smokeless revolver cartridges might want to know about the possibility of gas cutting of bullets. I could see a hollowpoint being pretty well torn up. Since a heavy magnum smokeless load can cut the good steel of a gun frame over time, who knows; could it even damage a copper jacketed bullet nose? A jacketed soft point? I don’t know. Probably the latter, I’d think.

I wasn’t in the habit of inspecting the bullets in adjacent chambers after firing a shot (who is? I’d never heard of “bullet nose cutting” in a revolver as being a thing) so I don’t know how I ended up noticing this. That was months ago. I believe I may have been looking for bullet jump due to recoil, since this was a full load with a new, heavy-ish bullet (no jump was ever observed, FYI). And in case you were going to ask, the cylinder gap in that gun is about three to five thousandths, probably no more than four, or fairly typical for modern guns as well.

6 thoughts on “Gas cutting of bullets”