Kalispell, Montana was on the way home from Glacier National Park so Barb and I decided to see if we could get a tour of the Montana Gold Bullet factory. I have reloaded nearly 39,000 (38,684) of their bullets and have another 4,500+ in stock and ready for the Dillon 550.

I called the number on their website and set up a time for yesterday that worked for Norm and us.

We arrived a few minutes early at the unmarked warehouse like building. I took a picture of Barb out front and Norm greeted us a minute or so later. 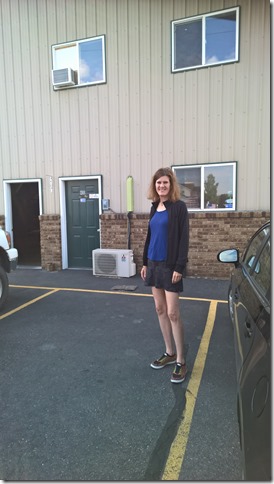 I asked if we could take pictures and Norm told us, “No pictures allowed.” As we went inside and started the tour Norm told us production goes down during the summer and there wasn’t as much going on as there sometimes is. I asked if the election had also affected sales. He said it had made a big difference not just for Montana Gold Bullets but across the entire industry. He had looked at demand over the years and it has gone through several cycles. The first peak occurred after Bill Clinton’s election and the last peak being just before the defeat of Hillary Clinton.

Before we moved on I asked why they used brass jackets rather than copper like almost all other bullet manufactures. Was there a technical reason or was it the just the appeal of the gold color and the neat name made possible by that color?

Norm explained their company wasn’t the first to use brass. Remington, with their Golden Saber bullets, was the first and marketed them extensively. There are other companies who also use brass in some of their bullets. There are some technical reason why brass is better in certain circumstances but that isn’t the reason why his company uses brass. And it wasn’t the appeal of color and the cool name of “Montana Gold”. Also, he didn’t come up with the name “Montana Gold”!

He said he probably shouldn’t tell the story, then proceeded to tell us how the name came about. I’ll refrain from telling the story here but I’ll drop the hint that it was a San Francisco pathologist who came up with the name “Montana Gold” for the bullets produced by Norm’s company. Norm thought it was a cool name and adopted it.

The reason they use brass is because it was forced upon them, indirectly, by the U.S. government. Many years ago the U.S. Mint began producing small dollar coins that were a copper sandwich. The demands of the U.S. Mint for the particular grade of copper the bullet company was using made it impossible for Norm’s company to get the jacket material they needed. It was either go out of business, shutdown until they could get supplies, or change jacket material. They changed jacket material.

Another story he told was of a commercial reloader who bid on a contract for law enforcement ammo specifying, and supplying samples using, Montana Gold bullets. When he won the contract and started delivering the finished product the end customer noticed the bullets were actually plated bullets which are much cheaper to make and generally considered of lower quality. They complained to Norm, who reported he hadn’t supplied those bullets. Norm now refuses to do business with that reloader and, furthermore, does not allow reloaders to mention “Montana Gold” even if they are using “the real deal” in their product.

We saw the 70 pound lead-antimony ingots they use for bullet core material. As there are no more primary lead smelters in the U.S.they get their lead from Canada. They used to get their lead from mines in Idaho not too many miles away. At one time they even considered moving to Idaho to be close to their lead source as well as some economic incentives.

Barb was particularly impressed with the extruding equipment that squeezes the lead through an orifice like so much toothpaste making a lead wire of the appropriate diameter.

I was surprised by learning that because the metals alloyed with lead (to get the desired hardness) are of a different density the ingots may not be of sufficient uniformity to meet their final bullet weight tolerances. Depending upon how quickly the liquid lead alloy is cooled to a solid after being stirred they may cut off a section of the lead wire as scrap because can cause the bullet to be too light.

The thickness of the jacket material and the consistency of hollow point formation also have an effect upon the final bullet weight. Tolerances stack up. They keep the weight of their bullets to about +/- 0.3 grains and sell bullets that are out of tolerance as “seconds” to people who take delivery at the factory who Norm is confident will be using them directly rather than reselling them.

After being shown a bin of with tens of thousands (or maybe 100’s of thousands) of jackets I told Norm about finding one in a box of completed bullets. This seemed to bother him some. He told us there were at least three different places in the process it should have been been found.

They have several machines which are dedicated to certain bullet caliber and style and a few they reconfigure as needed. We saw large multistage presses which put the lead core into the brass cup then form the cup around the lead and size it to make a completed bullet. I was surprised that the machine only produced about one finished bullet per second. That one machine takes about 40 minutes to produce one case of bullets the postman delivers to my door (actually–the sidewalk near the street, then he rings the doorbell).

I told Norm I had used their .401 diameter, 180 grain, complete metal jacket bullet until fellow shooter Don W. reported he got better accuracy with the jacketed hollow point bullets. As the price was only a fraction of penny more I tried those bullets and found Don was correct. I too got slightly better accuracy compared to the CMJs.

Norm said the decreased accuracy with the CMJs probably was because my crimping die was just a little to tight. If crimped too much it will end up as an undersized bullet. Because of the construction of the base on a FMJ, and even a JHP, as a slightly undersized bullet is fired it will expand back out and be just fine. But the base of a CMJ with the brass (or copper) disk doesn’t expand like the FMJ and JHP and “rattles” as it traverses the barrel resulting in a decrease in accuracy. By backing off the crimping die a little bit you should get the same accuracy.

Near the end of the tour Norm pointed at two work stations with women flicking bullets, one by one, off a conveyor belt. “That”, he said, “Is the most difficult job here. It takes a special kind of person to do that and when we find someone who can do it we take special care of them.” These women do the visual inspection of every bullet. They don’t work full days and yet Norm told us you can see from their faces they are drained and tired at the end of their shifts. They considered going to some sort of sensors and computer sorting but the visual computer in the human brain can’t be beat yet.

Barb and I spent nearly an hour with Norm and the stories and discussion continued until both Barb and I were in pain from standing. We had hiked over 33 miles in the previous four days and felt we could hike some more but not stand. My knees were “talking to me” in an angry tone so we thanked Norm and left with new appreciation and attachment to Montana Gold bullets.