Yes, there are people who are terrified of guns, but that is their problem, not ours.

I’m not suggesting that we be argumentative, but I am suggesting that we shouldn’t hide. Every time we act as if gun ownership is something to be embarrassed about, we help convince the people in the middle that the anti-gunners are right.

Jeffrey C. Dege
Epiphanies and gun rights
[I have some “conversation starters” on my desk at work: 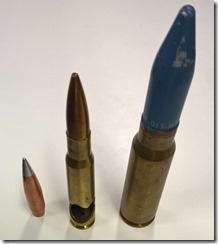 When someone asks me what I did over the weekend or a holiday I tell them about the match I participated, the ammo I reloaded, or the preparation work for Boomershoot I did. When friends come to the house to visit I show them my reloading bench. And I take new shooters from work, friends, and family to the range.

5 thoughts on “Quote of the day—Jeffrey C. Dege”