Nearly everyone I work with is a shooter. I have two peers. One was in the army for several years then helped build targets for Boomershoot this year as well as participate. The other has more NFA toys than he is willing to tell me about. My lead is former special forces. My boss is a former cop. His boss, our director, and her husband have helped make the targets for Boomershoot for the last three years as well as participate.

There was one exception. The intern. Caity’s last day as an intern will be next week. After a break she will return as a full time employee in August. She did well as an intern but there was a flaw. She hasn’t done any shooting since she was 10 or 12 years old. And it wasn’t that much.

Today, we set out to fix that flaw.

I started her out with some dry fire and she was rock solid. No jerking the trigger, excellent follow-through, and she picked up the mechanics almost instantly.

I put her on a suppressed .22 pistol with slow fire at about eight feet. She was nailing it with about a 1” group. Okay, 12 feet. The group size increased some but still well within the black of the target. Okay, 20 feet. Still in the black.

Okay, let’s try something else.

I removed the suppressor to reduce the inertia and put the target at about eight feet. I had her starting at low ready and then put one shot on each of the four bull’s-eyes. Her splits were probably 1.5 seconds and she was still nailing the targets. She shot magazine after magazine and kept the shots all in the black with the splits decreasing into the sub one second range: 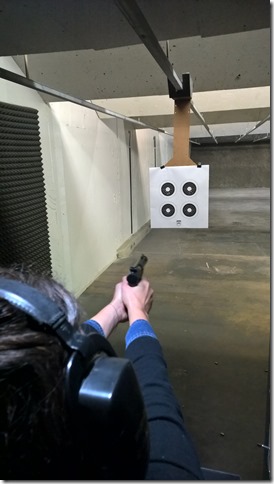 I got out my powder puff loads for the .40. She couldn’t hold the gun firm enough to get reliable cycling but said the recoil wasn’t a problem so we tried a couple rounds of major power factor. She shot those just fine. No recoil issues. So, I gave her a full magazine.

Start at low ready and put one shot on each target…

Still almost exclusively in the black with the splits again approaching one second: 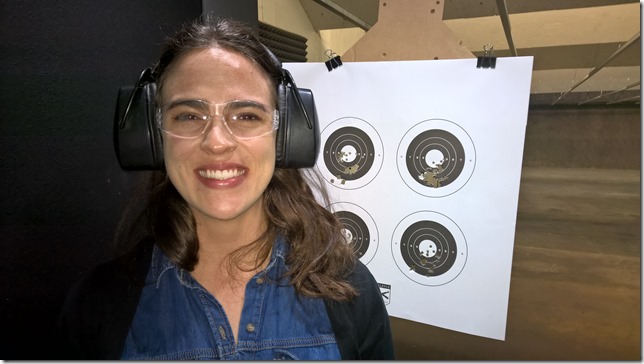 Okay. She’s a keeper for our team.