I found the world’s reaction to the partial information broadcast far and wide fascinating at many levels. At 12:06 AM Wednesday morning, the 31st of June, The Real Donald Trump (the God Emperor and President of the united States) sent a tweet. As with so many things said or typed at odd hours of the night, and from our president, it wasn’t phrased with quite the perfect polish and eloquence some might have hoped.

“Despite the constant negative press covfefe” was the tweet.

And then radio silence. At first the media expected it to get deleted, or updated, or followed with another message. It was as though a 20-megaton Rorschach-test was set off over the nation.

The left said it was proof of his being mentally unstable, evil, incompetent, and having bad breath. The media exploded over what it meant, speculation about what he was about to say, how he was still allowed to send late-night tweets, and trying to be first to press about… what, exactly? It was a SHINY OBJECT that allowed them to make fun of the president! Must chase shiny squirrel!

The right shrugged until the saw the hysterical overreaction of the left/media. So many more important things in the world, and the media spend hours on a tweet typo? Whoa. Normals and the right had the best laugh they’ve had in a long time mocking the shallowness, triviality, obtuseness, hatred, and lack of objectivity of the press, and the left in general. Then the meme-war turned hot. Check out what CafePress already has with “covfefe” on it. 10 pages and counting; it was “only” eight last night. My fav is a tee that says “Covfefe killed Harambe“. Or at Amazon; I like the “What part of covfefe don’t you understand?” item.

Miriam-Webster wished they had not woken up Thursday morning.

From the context, it’s likely that “covfefe” was supposed to be “coverage.” Coverage of what, exactly?

But it’s a really cool-sounding word that you might be able to use anywhere. Is it Arabic for “I stand up?” (It is if you misuse Goggle Translate in precisely the wrong way). Snopes got into it. There are numerous definitions in it for the Urban Dictionary. It sounds sort of like “coffee,” so it’s on a lot of mugs. It’s been taken as custom license plates in more than twenty states already (including CA and WA). Dogs are getting named that. CNN (Meet the Press) misspelled Cheif on screen while ridiculing Trump’s covfefe. Bumper-stickers and hats are being produced. Say it with a phoney  accent and slap it in a sentence and it flows really well. Scott Adams of Dilbert fame has weighed in. I can just hear the owner at the dog-park now, calling out for their pooch: “Here, Covfefe! Come here, boy!” The media is treating it with the same gravity as the Kathy Griffin “humor” with her posing with a model of Trump’s head like a ISIL loser/butcher. There are creatively bizarre things from Gab.ai like this: 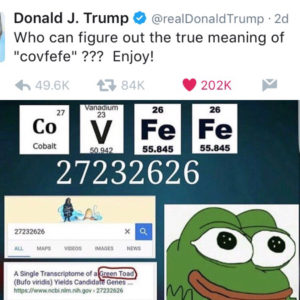 If you are not already on Gab, there are many more there.

We live in weird times.

If Trump didn’t know already, any time he needs to take the media’s attention off of something, send out a cryptic tweet with a misspelling at oh-dark-thirty and it’s mission accomplished.

I think it a week it’ll be a two-second political test. See how a person reacts to “covfefe:” do they see it as Trump-negative, or as negative on [dem/prog/left/media]? Their response is the answer; you can place them on the political spectrum.