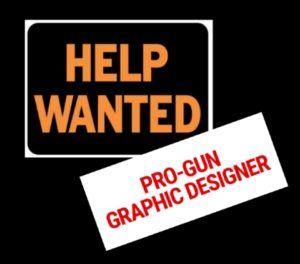 Hello, gun enthusiasts! Anyone out there a graphic designer, willing to help add final touches to a logo? It’s for a prominent gun rights group.

I’ve completed the creative director side of things; just need a designer to add a little polish.

If you can help, please reply in the comments. Thanks,
Stephanie

P.S. Being that it’s for a non-profit, the pay is $0, but you’ll have an excellent piece to add to your portfolio.

P.S.2.0: Sure, I could farm this out to fiverr.com, but, in this instance, I wish to work with a pro-gun designer who “gets it”.