Nearly a year and half ago I started having problems with my STI DVC. Sometimes the trigger pull would be MUCH greater than others. At times it would be so great that I could barely get it to fire. And it only happened at matches! On the next stage it might be just fine. It would never do that while in practice or when I was drying firing it at the bench at home.

Then, finally, three weeks ago, Ry and I were in the training bay at West Coast Armory and it did it again. I dropped the magazine, ejected the round in the chamber and tried dry firing it several times. It was just fine.

I put the magazine back in and chambered a round. Impossible trigger pull. I dropped the magazine, ejected the round, and dry fired again. Just fine.

Magazine in and dry fire? Nope. It was a heavier trigger pull than I could manage.

I pulled on the trigger as I slowly removed the magazine. CLICK!

It’s the magazine! How in the world does the magazine affect the trigger pull? I tried it with other magazines. Three out of my eight magazines had the problem. Visual inspection did not reveal anything different about them.

This explains why it only happened in matches. I almost always use different ammo in practice than at matches (the indoor ranges where I practice require copper jacketed bullets and I shoot polymer coated bullets at matches) and the magazines with some left over match ammo are not used in practice. It finally happened that I removed the match ammo from the proper magazine and used that magazine in practice.

A day or two later I had the time to diagnose the problem with the magazines. I did some measurements and found the “bad” magazines were about 0.005” longer than the “good” magazines at the spot where the trigger bow goes around the magazine: 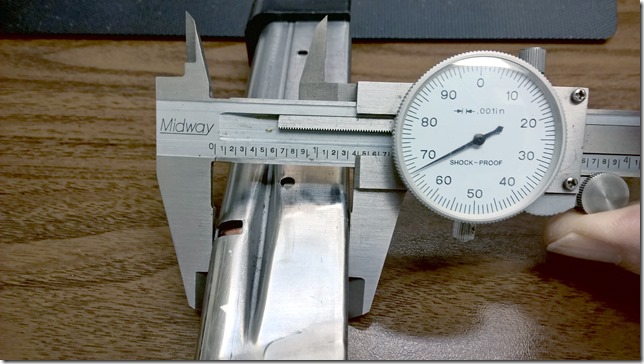 If the magazine was 1.366” or less everything was fine. The “bad” magazines were in the range of 1.367” to 1.371”. The 1.367” magazine had a noticeably harder trigger pull but not so much that it was much more than “odd”. And even with the 1.371” magazine if the trigger were pulled off to one side or the other rather than straight back then it would fire much easier.

I really should get the STI Trigger Stirrup Die from Brownells for the proper fix.

Man, that was a perplexing problem for such a long time.