Boomershoot was muddy for staff this year. Last fall Barb and I restored the berm with a dozer and planted grass on all the bare dirt. The grass was looking pretty good, for new grass. As soon as we started walking in it, it turned to soup (photo by daughter Kim of her own shoes): 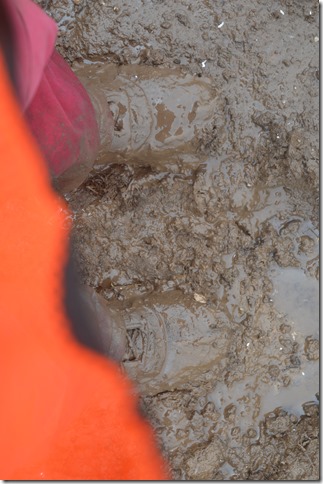 The targets started out white but after a nearby detonation would become completely covered in mud. One participant called the targets, mounted on the top of 18 inch tall surveyors stakes, “Mud Lollipops”. 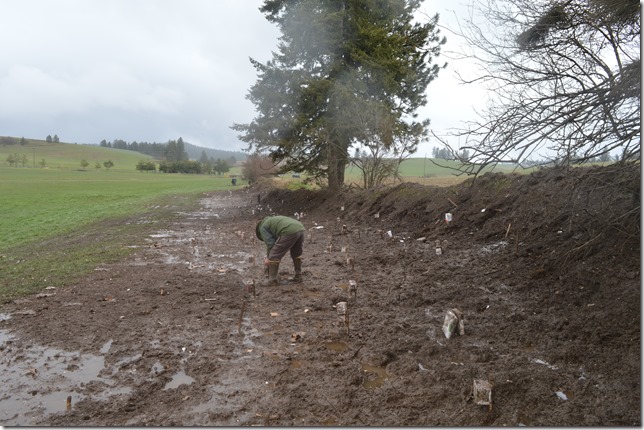 I’m going to have to replant the grass and hope it gets a better chance at survival next spring.

The parking area for participants was soft but not too hazardous. One unexperienced off road person got stuck with a two-wheel drive car but other than that I don’t know of anyone who has serious problems in that area.

At the end of the event when Barb and I were hauling stuff in the trailer back to the shed I was unable to get up a gradual hill: 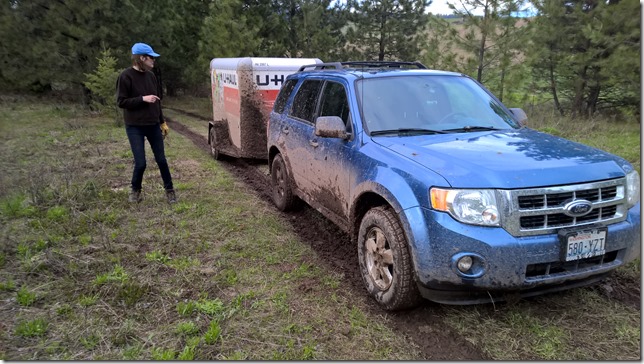 It was just too greasy. We carried everything going to the Taj the last 100 feet but still the load was just too much for my vehicle to pull up the hill on that grease. I had to unhook, connect with a chain from 90o, rotate the trailer, hook up directly, turn around, and clawed our way out the way we came. We had stuff in the trailer that needed to go to Boomershoot Mecca (our target production facility) so rather than go the short way through the field we went via the county road.

On the way to the county road we had to cross the field past the staff clean up crew. The field had standing water in it and was soft. Each previous time I had driven across it the Escape slowed and I knew we were at high risk of getting stuck. Getting enough momentum prior to hitting the soft spot was essential and I had to make a wide berth around the staff. When you are in danger of getting stuck you don’t want to be making turns, you want to go fast and straight. I didn’t have that option this time and I blasted past in a wide arc as fast as I dared. I made it past, through the standing water and out to the county road. On our next trip back to the clean up crew Barron approached me and said:

None of us in the group has ever seen someone drifting around a corner with a trailer before.

Hmm… I suppose that is uncommon. But these were uncommon times. After all, with all the mud on the trailer Barb and I used rakes to scrape it off: 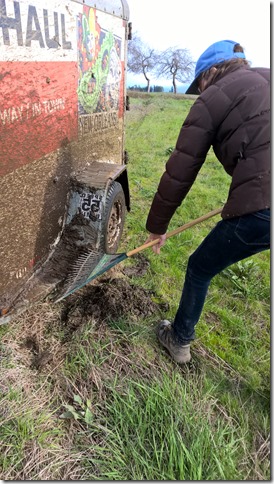 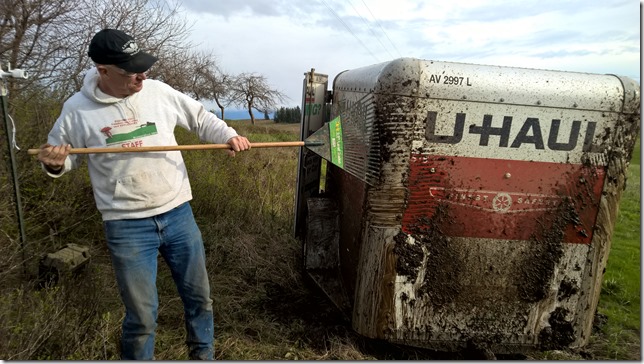 Update: Barron sent me a link to his video of me going through the swamp. This is not the instance I was talking about above. This was from a little later in the day: