I ran over in my mind every property by which she was distinguished, not only from other animals, but from those of the same genus or class of animals, endeavoring to fix some meaning to each, not wholly inconsistent with common sense.

I recollected that her eye excelled in brightness, that of any other animal, and that she has no eye-lids. She may therefore be esteemed an emblem of vigilance. She never begins an attack, nor, when once engaged, ever surrenders: She is therefore an emblem of magnanimity and true courage. As if anxious to prevent all pretensions of quarreling with her, the weapons with which nature has furnished her, she conceals in the roof of her mouth, so that, to those who are unacquainted with her, she appears to be a most defenseless animal; and even when those weapons are shown and extended for her defense, they appear weak and contemptible; but their wounds however small, are decisive and fatal. Conscious of this, she never wounds ’till she has generously given notice, even to her enemy, and cautioned him against the danger of treading on her.

Benjamin Franklin
December 27, 1775
Benjamin Franklin on the Rattlesnake as a Symbol of America
[Via an email from Firearms Policy Coalition promoting “a limited-edition “Don’t Tread on Me” morale patch.” 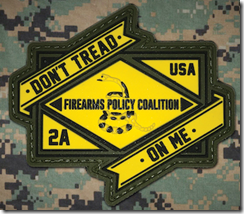 Interesting. I had never given the Gadsden flag anywhere that much thought and there is far more reflection on the meaning at the link.—Joe]

2 thoughts on “Quote of the day—Benjamin Franklin”