Last Monday I made another donation to what is now called Bloodworks Northwest (formally Puget Sound Blood Center). My online account with them goes back to 12/17/1998. It was my 80th pint on record with them. Ten gallons: 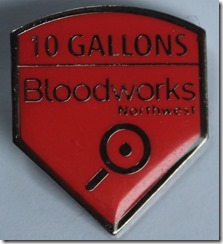 I knew it was going to be my 10th gallon and Barb wanted to celebrate. I raised an eyebrow. She elaborated, “There should be a parade or something.”

I have speculated before that perhaps I had donated close to a couple gallons to the Red Cross as well. I found an old Red Cross donor card: 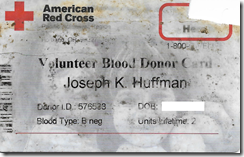 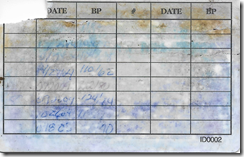 Two units are indicated on the front and eight on the back for a total of 10 units or one gallon and two pints. I was pretty sure this wasn’t all. So I went looking online. I created an account with my birthday and what I figured was the last zip code they had for me. Bingo! They said I had donated 13 units (about 1.5 gallons):

I looked through the donation history but they only went back to April 2, 2002.

My first donation was in the mid 70’s when I was in college. I think I participated in more than one blood drive at college and donated when I worked at Boeing and Teltone in the late 70’s. I’m sure I donated at blood drives while at Data I/O in the early 80’s. I know I donated during Operation Desert Storm (early 1991) because I remember standing in line for a couple hours. And so… I don’t really know how many gallons I have donated but it is probably over 12 and perhaps close to 15.

When I was probably about 10 years old my Uncle Alden had stomach ulcer which he didn’t know about. He got very ill before his family insisted he see a doctor. An ambulance took him to the hospital (only getting up the snow covered driveway to the county road with help from either Uncle Jack or cousin Alan with the Jeep pickup). He needed several pints of blood and Dad and some of the neighbors went into town to donate in his name. Dad saw one of the neighbors there, (I’m not sure of his name, it could have been Walt Eberhart) but Dad reported back that over the years the neighbor had donated 10 gallons. This impressed Dad as well as the rest of our family.

At some point it became my goal to donate 10 gallons.