Nearly half of men and one-third of women would, ideally, like to be practicing some form of non-monogamy. However, just 8% of men and 7% of women said they wanted to be in a completely open relationship. This means that most of the people who are into non-monogamy want there to be at least some rules or restrictions in place.

Dr. Justin J Lehmiller
October 31, 2016
Would Your Ideal Relationship Be Monogamous Or Open? 1,000 Americans Weigh In
[Isn’t that interesting?

The authors of Sex at Dawn: How We Mate, Why We Stray, and What It Means for Modern Relationships would probably say the only surprise is that the percentage is so low.

Here is where it gets even more interesting: 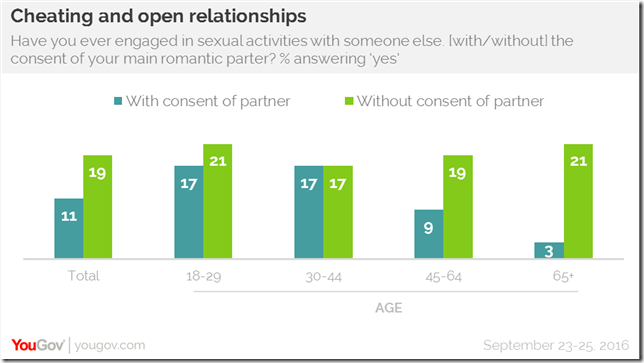 Behavior doesn’t change much with age but openness with their partners does.

9 thoughts on “Quote of the day—Dr. Justin J Lehmiller”