If you got me one of those shirts and I wore it to school, would you do a war dance on their desks if I got in trouble?

Xenia
January 1, 2006
Comment to Speaking of political correctness
The shirt in question: 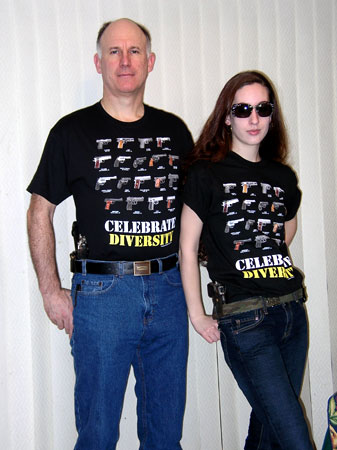 [I’m of the opinion advocates for freedom don’t do enough “war dances”. We just want to be left alone and when someone or some group infringes upon our freedom the easiest way to be left alone is to let them have what they want. The confrontation required to assert our freedom and reclaim it is against our nature.

To the authoritarian exercising control over others and confronting people is how they get pleasure in their lives. Remember what Marthe Kent said:

And it is a thrill; it’s a high… I love it; I absolutely love it.  I was born to regulate.

When they are successful in infringing up on the freedom of others it gives them an incredible high and they want more. Their thirst for power will never end until people stand up to them and eliminate the pleasure they get from infringing upon our freedom. I’m thinking one of the new tools I’m going to put in my “tool box” when confronted by anti freedom people is to tell them because of their confrontation I’m going to donate another $100 to the NRA. And if they continue, I’ll start counting in $20 increments, $120, $140, $160… And perhaps for those who are particularly persistent I’ll tell them because of their attack I’m going to give away an “assault weapon”, without a background check, to a woman who will appreciate it. If they continue, start adding in the boxes of ammo.

Using logic and facts doesn’t have an impact on them. Pushing their emotional buttons will make it painful for them in ways that demonstrating they have little more than ignorance and a childlike belief system in imaginary solutions can’t.

Or as Glenn Reynolds is fond of saying (as well as the Obama administration) , “Punch back twice as hard.” They attack with rhetoric and I will counterattack with resource allocation to what they believe to be among the most effective and evil political organizations in the country. Their rhetorical actions will generate the possibility of real political  consequences.

In answer to Xenia’s question, over ten years ago, I asked what size she wanted, she got the shirt (obviously), she wore it to school, and I never had to do a war dance for her. I don’t know if she still even has her shirt but mine is one of my favorite shirts to wear when I go through TSA screening.—Joe]

Those who need to know already know what the following means. If it’s not crystal clear to you then don’t worry about it. It’s not for you.

3 thoughts on “Quote of the day—Xenia”