Figure 2 provides a brief context to show the wider natural range of temperature over the last 10,000 years. It shows the temperature of the Northern Hemisphere derived from Greenland ice cores. 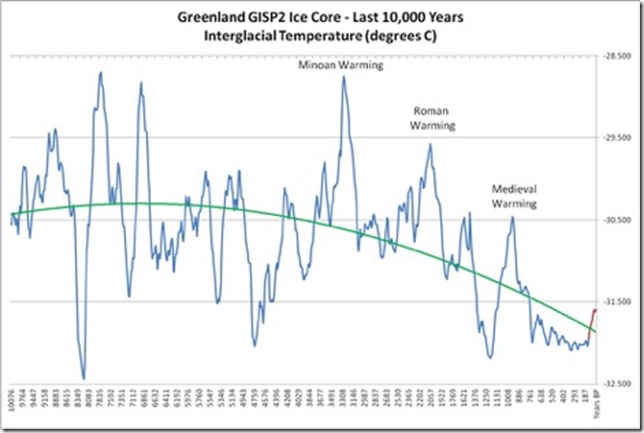 The current temperature is on the right (red line). Some salient points that expose the lies and distortions;
* The world was warmer than today for 97 percent of the last 10,000 years, a period known variously as the Climatic Optimum, or more recently the Holocene Optimum. We have known about this warmer period for at least 75 years.

* The world was 2°C warmer than today 1000 years ago during the Medieval warming. Remember, you are told that the world is going to warm by 2°C, and that is catastrophic.

* The world was 4°C warmer than today during the Minoan warming.

* We are told the amount and rate of temperature increase in the last 100 years (shown in red) is abnormal. Compare the slope with any of the previous increases.

* The green line indicates the larger trend and shows that the Earth has cooled for approximately the last 7000 years.
The CO2 changes over this period, but those changes follow the temperature. The global warming proponents tell the public it is the opposite.

Tim Ball
August 1, 2016
Dr. Tim Ball: How the world was deceived about global warming and climate change
[Assuming Figure 2 is factual data then this would seem to be conclusive evidence that nearly everything the fear mongering climate change people claim is false.—Joe]

18 thoughts on “Quote of the day—Tim Ball”