On Sunday (July 24th) we went to Third Beach.

There are lots of pictures below the fold. 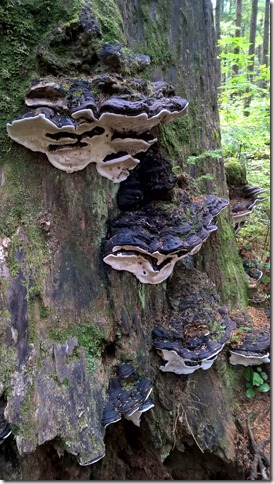 The hike in was a bit more interesting than the walk to Second Beach. There was some huge fungi growing on this dead tree.

Barb tossed a couple trees out of the trail so the rest of us could get through without climbing over them. 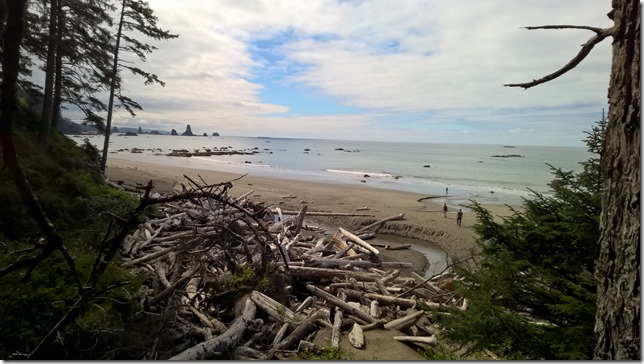 As was the case with Second Beach the trail exit onto the beach was blocked by driftwood. 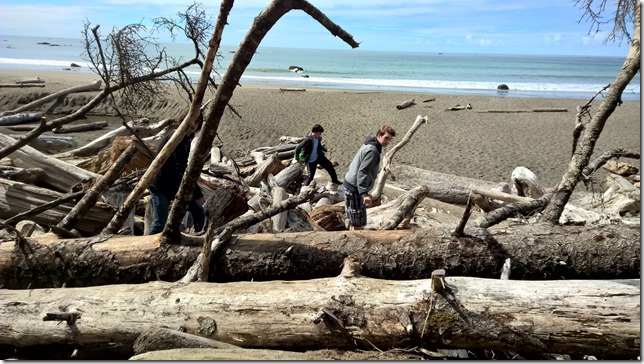 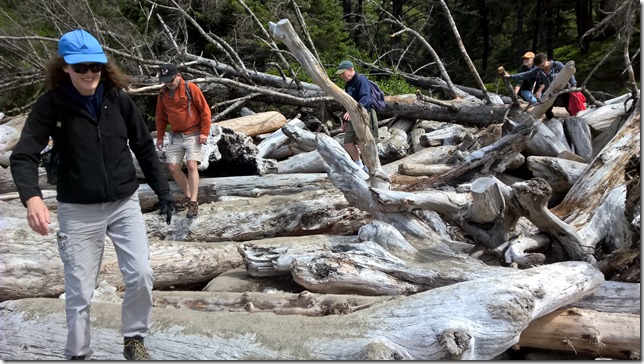 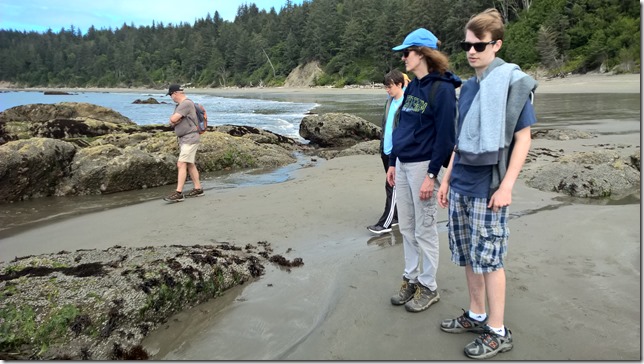 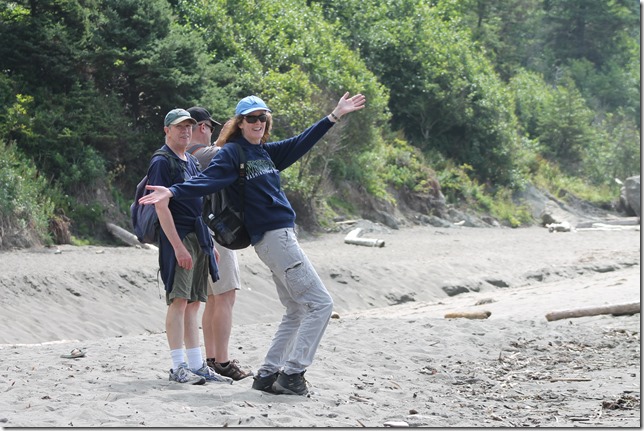 Barb is such a happy person. 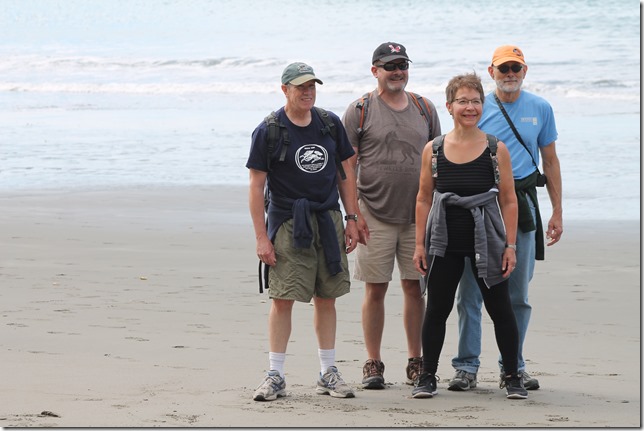 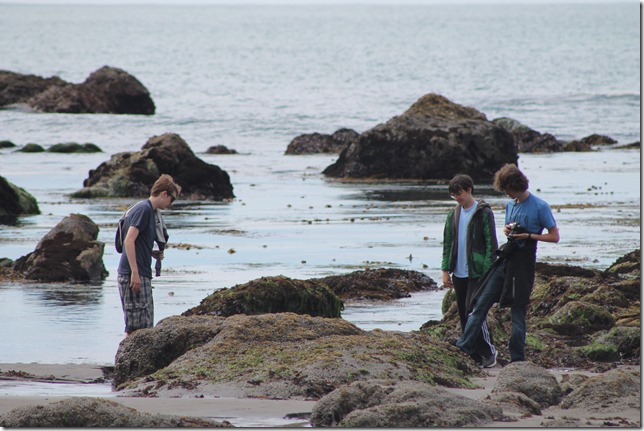 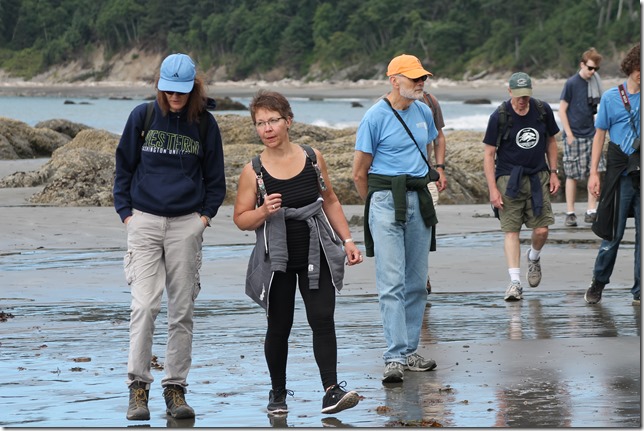 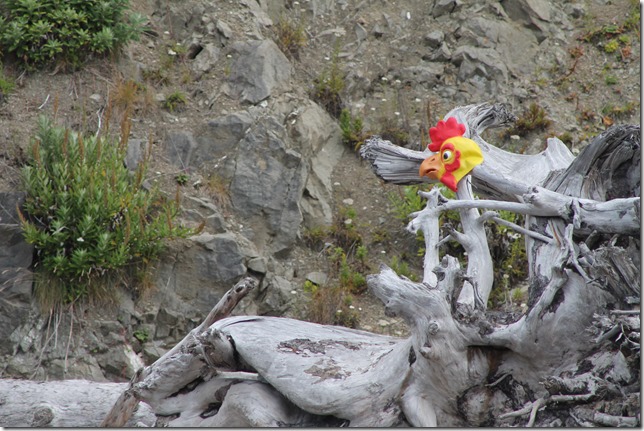 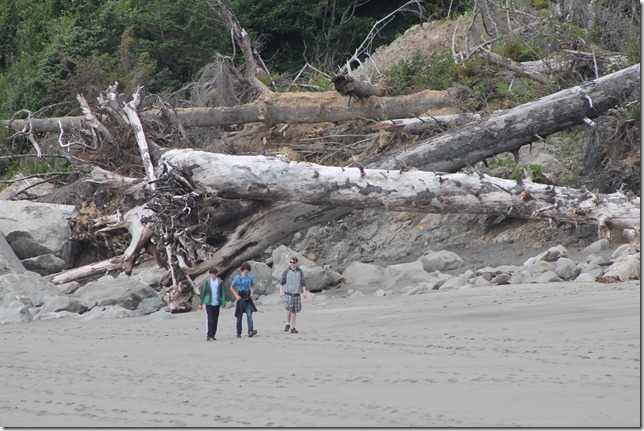 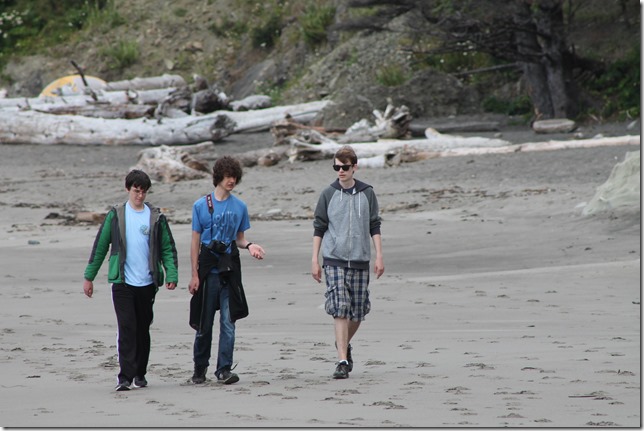 The group decided to take a trail near the end of the beach, through the forest again, to a beach further south. With the dry ground it probably could have been done without the ropes and stairs but I wouldn’t want to try it when it was muddy. 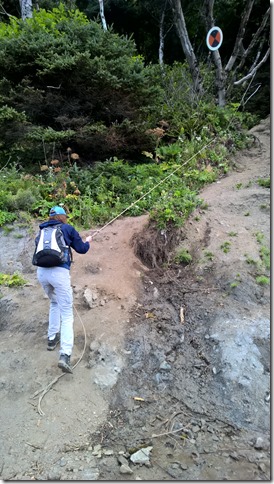 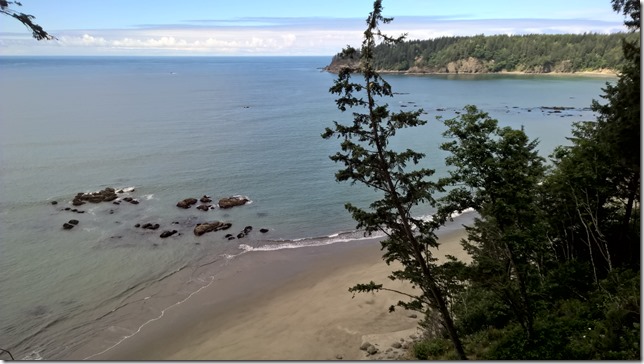 There was a nice view shortly after reaching the top 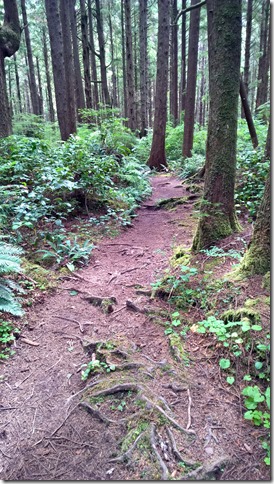 Most of the time the trail was pretty good. 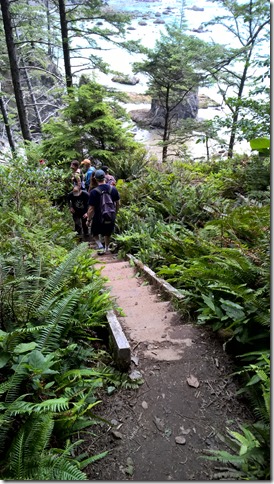 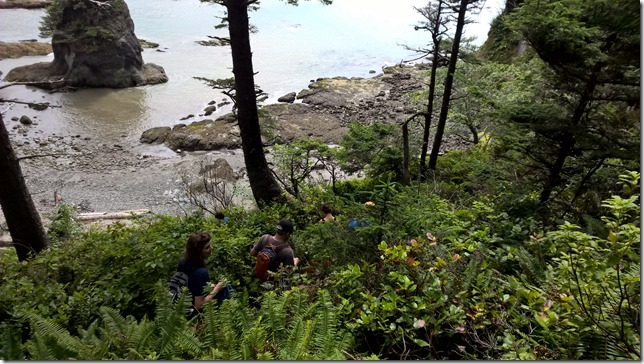 This was what Mark wanted to call “Fourth Beach”. 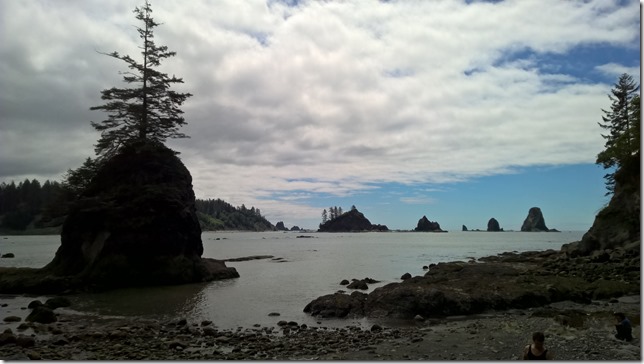 This was the view from the log we sat on while we ate our lunches. 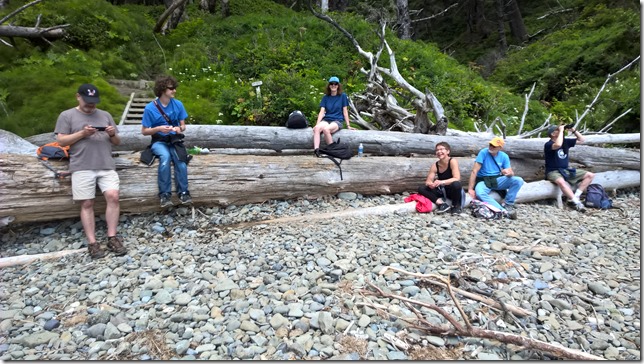 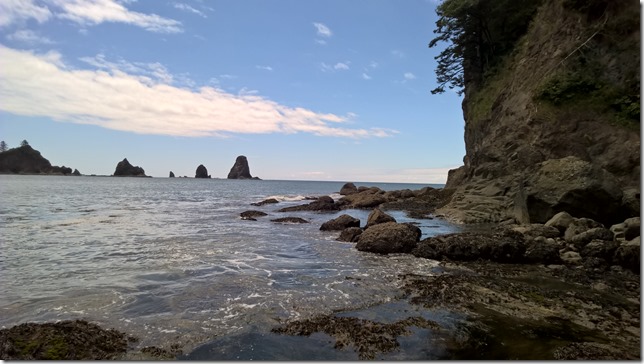 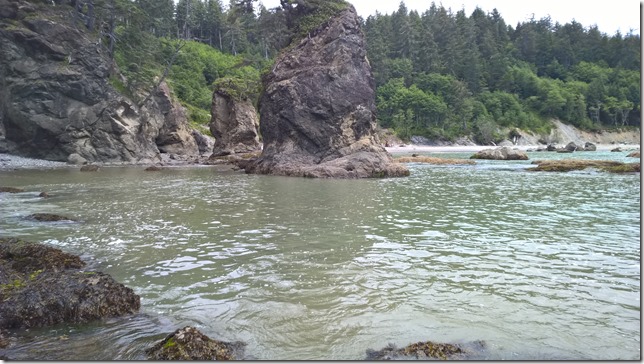 We spent about a half hour at the remote beach then climbed back out. I fell twice. Once I landed really hard on my butt and outstretched hands when my feet slipped forward. The force transmitted up through my arms cause cracking noise in my shoulders and neck and I was slightly dazed. I got up after a few seconds and continued on with the effect disappearing after a few minutes. The other time was on the way in when only one foot slipped forward throwing my body to the right and my right butt check landed on a dead tree with a broken branch pointing straight up. It didn’t break the skin but I still have a dark bruise over a week later.

Returning to Third Beach the scenery had changed with the incoming tide. 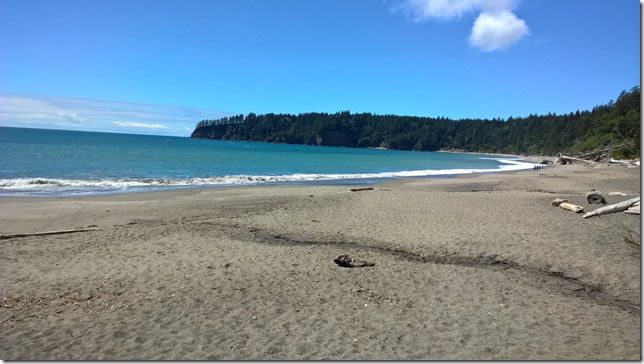 I was happy to get back to our cabin, take a shower, and just enjoy the view from our living room windows. 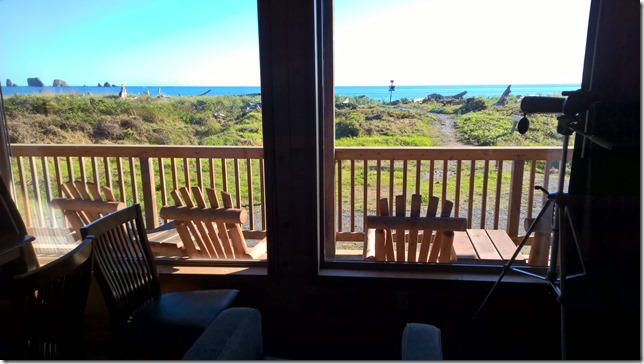 The cabin as seen from the beach side.

After supper we went for another walk on First beach and watched a bunch of people trying to surf. 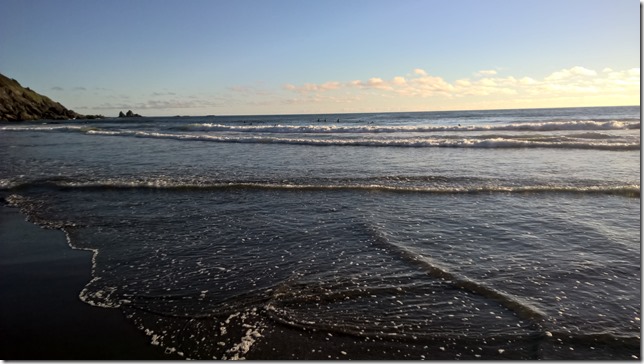 There were also waves that brought in what looked like thousands of small (maybe six to eight inches long) fish who frantically wiggled on the sand working their way back into the water. A bald eagle swooped in and grabbed one maybe twenty feet away from us.

Then, to end a wonderful day, we watch the sun set before going to bed. 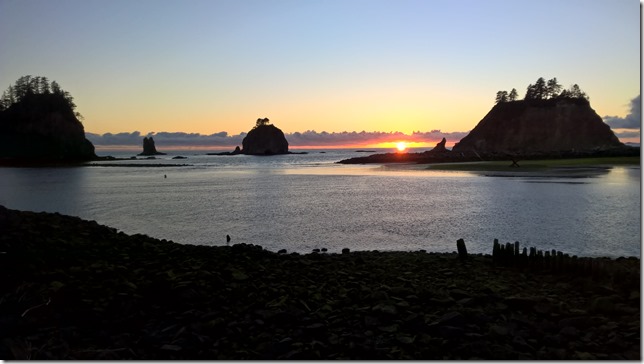