If you believe more gun control by your government is going to save lives, you are being naïve. The champion of all the mass killings in this world is always a tyrannical government.

Where I came from, China had killed thousands of the students by its own government during the massacre of Tian An Men square in 1989. I surely wish my fellow Chinese citizens back then had guns like this one I am holding in the picture.

I am a Chinese immigrant and an American citizen by choice. I once was a slave before and I will never be one again.

I will always stand with my AR, no matter what my President signs with his pen. 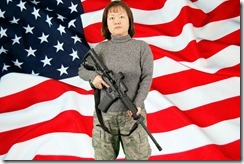 5 thoughts on “Quote of the day—Lily Tang Williams”