I attended the Steel Challenge match at the Renton and Fish and Game Club today. I’m moderately satisfied.  I was first in Iron Sighted Pistol (ISP). But there were only three of us in that division. I came in 5th out of 13 in Rim Fire Pistol Iron (RFPI) sighted. I had two jams with the rim fire pistol. I called mulligan with one of them and got to shoot that string over. I was 12 seconds down from the next higher scoring shooter. The four shooters above me are all in the super squad of junior shooters who won nationals last year so I don’t feel bad getting beat by them. They are out of my league.

Compared to last month my ISP time went from 91.41 seconds to 78.37 seconds. I was shooting the reduced power Blue Bullets which almost for certain accounted for some of the improvement.

Comparing my RFPI time to last month I went from 64.47 seconds to 66.19 seconds. This difference is in the noise because we were shooting different courses of fire. These differences will easily account for the differences in time.

Steve, from work, showed up and watched the first stage we shot. He also took some great pictures of me. My favorite is this one: 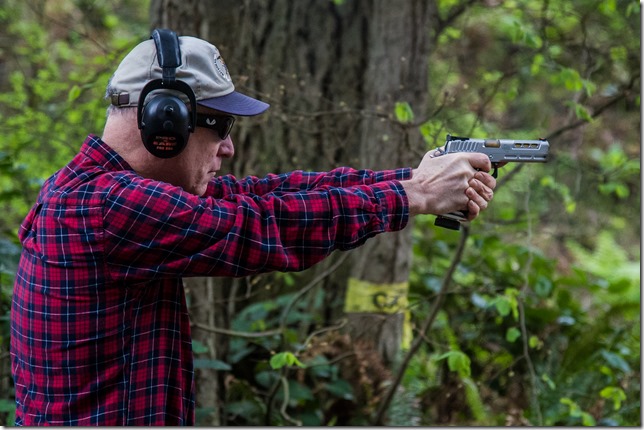 Although there is one picture with brass in the air and another with the gun in recoil that are also pretty cool.

As a counter to the claim that old, fat, racist, white guys dominate the gun ownership ranks I found it interesting that of the seven guys on our squad only two were white guys. There were four people of Asian descent, and one Hispanic.