The other day I was cleaning out a box of old stuff and I found this: 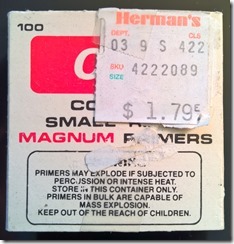 It’s some very old primers. I’m pretty sure I bought these in Moscow Idaho about 1975. This was long before I was into guns or had ever reloaded ammunition. I think I was going to use them to make an Estes rocket into some sort of missile with a “warhead” for the 4th of July. I never got around to it and all the primers are still in the package.

Herman’s World of Sporting Goods closed their last store in 1996, but I’m pretty sure the one in Moscow was closed many years prior to that.

Today a box of 1000 Small Rifle Magnum Primers cost about $35.00, if they were packaged and sold in 100 piece quantity, as in the picture above, the price would be just about double what they were when I bought mine.