Cherie has done some shooting before. Her husband, John, gave her a .38 Special revolver and a .40 S&W semi-auto. She recently took a NRA class and shot a variety of guns but wasn’t comfortable using a gun for self-defense. This was the main reason for getting the guns in the first place.

I put her on a suppressed .22, checked her grip, and had her do some dry fire. Things looked good so I had her shoot a couple of 10 round magazines with it. She shot slow but with good accuracy.

I asked what she wanted to work on and she said she had never shot the .40 semi-auto and wanted to shoot it. Her first shot from about 15 feet away was dead center: 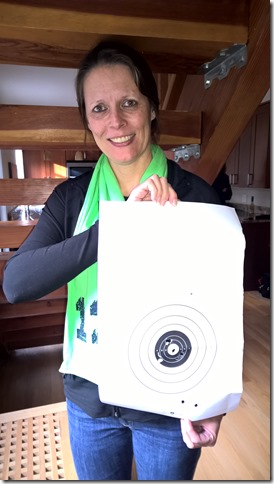 But it was obvious the recoil was far more than what she expected and was comfortable with. She fired a few more shots and they were still very good for a while. This was even though I could tell she wasn’t handling it too well. Then there were the two far low and right. I suggested she take a break and she agreed.

She then tried the snub nosed .38. Similar results. The recoil was just more than she was comfortable with. She said she felt nauseous.

I put her on an unsuppressed .22 and had her do double taps and target transitions from a high ready position. At first she said she couldn’t do it. I moved her to about eight feet away and encouraged and coached her. Within about 75 rounds she was doing a double tap in under a second and a transition in about 1.25 seconds with great accuracy. Almost all her shots fit under my hand on the USPSA target in the top of the lower A-Zone. There were no hits on the hostage with its shoulder just below the exposed portion of the bad guy A-Zone area.

John and Barb were doing some shooting as I worked mostly with Cherie. When John tried the double taps and target transitions he had several hits on the hostage including one directly in the center of the neck. Not good. We teased him some about that as we all tried the same exercise and he was the only one shooting the hostage once every 10 rounds or so.

After we wrapped up at the range we went to Barb’s house for dinner and I showed Cherie how to pie a corner and shoot around the corner with a plastic training gun. We talked about where to go from here because the centerfire guns just aren’t working for her.

We should review her notes on the guns she shot in the NRA class and see if we can learn anything from that. And we probably will go back to the range sometime and try some .380 and 9mm guns. But I expect the best approach will be to spend a lot of time with a .22 so that she can feel totally at ease with gun handling and accomplishing various self-defense tasks. I want her to be able to do those sort of things almost “on auto-pilot” under stress and perhaps by then, with only the recoil issue to address, she can work on shooting with one of the centerfire guns she already has.