About two weeks ago my car was burgled.

Yesterday the police caught someone that could have been involved (see also the police news release):

One of two alleged burglars attempting to rob a home on 123rd Avenue N.E. was tracked down and apprehended by one of the Bellevue Police’s K-9 units early Thursday morning.

The suspect, a 25-year-old Bellevue resident, later admitted to committing a dozen different vehicle prowls in the area overnight.

After the suspect refused to surrender, Roc was sent in to apprehend him. The man was later treated for a dog bite received during his arrest.

A dozen in one night! I look forward the police finding the storage unit or wherever they have been stashing the stuff. There were some things I discovered missing after I sent in the insurance claim and the police report. Maybe I will get those back. 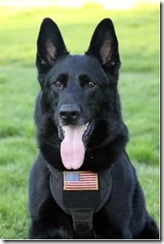 I’d like to give Roc a doggy treat to thank him for chewing on the guy.

6 thoughts on “I hope these are the guys”