I went to a USPSA match today and my gun barrel fractured and locked up my gun. This is a cropped version of the picture I tweeted about shortly after the incident: 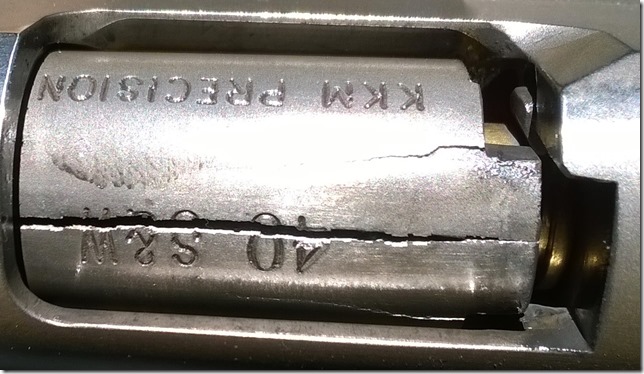 Robb Allen almost immediately asked the obvious question, “Your own loads or factory?” And of course the answer was they were rounds I had loaded myself. In many situations this would be the end of the story. The shooter had a squib (a round with no or insufficient powder) which resulted in a bullet stuck in the barrel and the next round set off the automatic self-destruct sequence of events. Another way it could have happened was a round got double charged or the wrong powder was used. In any case it is relatively easy and frequent that handloaders blow up their guns through their own carelessness.

But as Ry pointed out the head of the shell casing is still there which probably means there wasn’t an over pressure event involved. I was able to hammer the gun open far enough for the shell casing to drop out and confirmed Ry’s suspicion: 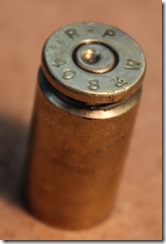 This is a perfectly normal looking piece of brass. Even the primer looks normal so there was no overpressure event involved. I tried putting it in the case gauge and it would only go in about halfway. The chamber of barrel is now, of course, large than spec and the brass expanded just a bit more than normal even though it can’t be seen with the naked eye.

I tried for quite a bit to get the gun open in the hopes that I could remove the barrel but I wasn’t able to get it open any beyond this:

You can’t see it in the photograph but the feed ramp also split.

I finally just closed it up: 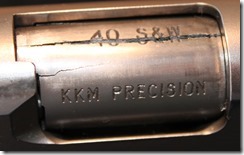 I don’t know what the root cause was. I wonder if it wasn’t a timing issue which caused some abnormal stress because I had a broken link with this barrel once before.

Something that is interesting to me is that I had the lugs break on the original STI barrel after about 20,000 rounds and this barrel failed after almost exactly the same number of rounds. I have known the gun was living on borrowed time for nearly six years now so I can’t really complain a lot.

I’m not going to try to get the gun repaired. As Barb, essentially, and Gay_Cynic said, I used the gun up.

Update: I should have said that the shot sounded and felt almost normal to me. The recoil cycle wasn’t quite right but there wasn’t a greater than normal impulse or BOOM!