There is no reason on earth, other than to kill as many people as possible in as short a time as possible, that anyone needs a gun designed for a battlefield. 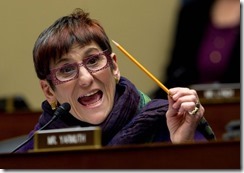 You would think they would get tired of rerunning these same tired arguments. Our standard responses are:

Her ignorance and malice is evident in this part of the article in The Hill:

DeLauro is in favor of stronger guns laws that would completely ban assault weapons and high-capacity ammunition, she emphasized this bill would not force gun owners to turn in their firearms.

“High-capacity ammunition”? And of course she makes it clear this is just step toward her real goal of a complete ban. Don’t ever let anyone get away with telling you that no one wants to take your guns.

Sebastian and most of the commenters over there don’t see a problem for gun owners in this proposed law. Say Uncle just says, “No, thanks.” TriggerFinger doesn’t seem much concerned about it either.

But I would worry about this giving the Feds a list of people that are verified previous owners of “assault weapons”. One might imagine, in her mind, these are the people that need to “dealt with”. The administration has already demonstrated they use the IRS as a weapon. So what better way to get a list of your enemies than pay them a little something to identify themselves to your “weapon”, the IRS?

It’s a variation of the Lenin quote, “The Capitalists will sell us the rope with which we will hang them.”—Joe]

22 thoughts on “Quote of the day—Rosa DeLauro”