Yesterday at work they told me to prepare for a group meeting where I will be introduced to everyone. I’m supposed to tell them three things about myself. Two of which are true and one which is a lie. The group is to guess which is the lie.

This sounds like so much fun I’m going to prepare for it here. But since the readers of this blog know so much about me already or could easily search the blog for many of the answers I’m going to give you a bunch more truths to better hide the lie.

I’ll update this post with the answer in week or so. In the meantime post your guess in the comments.

I think there are only two people in the world who I currently know that can identify with certainty which one is the lie.

Update: The lie is:

I won first place while playing for the University of Idaho chess team in the Association of College Unions Intercollegiate Tournaments in Region 14 (Alaska, Washington, Oregon, Idaho and Montana).

The truth is it was second place: 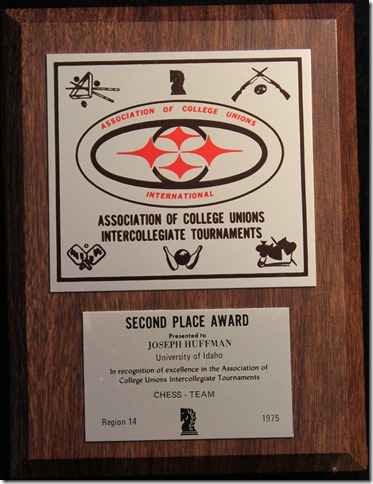 The reason only two people I currently know who, “can identify with certainty which one is the lie” are Barb L. and Barb S. Barb S. because she was around when I played in the tournament. Barb L. because she could have looked in the trophy case to confirm or deny my claim. My kids never paid much attention to my trophy case and I have lost contact with all the other people in that tournament.

The comments to this post were some of the most fun I have had on this blog.

In answer to Ubu52 who doubted I had built the electronic alarm for my locker here is a picture of the remnants of it I found in one of my recently unpacked boxes:

It has a single silicon controlled rectifier so it is electronic. The magnetic reed switch is for turning it off. There was another reed switch for triggering the alarm after a delay created by the resistors and capacitors. But I replaced the reed switch with just a couple of bare wires after someone used a huge (something like 25 pound) horseshoe magnetic on the outside of the locker to trigger it. The Sonalert was a new product on the market then and I used one of those for the sound producing device. It was eventually used in a different project of mine and I don’t know if I even have it any more.

As far as the consumption of alcohol and other recreational drugs all the things I said are true. I’m even pretty sure that Barb switching the glasses on me was an accident.

The one glass of beer I had when I was 17 was my first day of college when I fell to the peer pressure, felt bad about it during and after, and didn’t do that again.

It was interesting the response my kids had to this post. Xenia hasn’t said anything about reading it but James and Kim both had the chess story and the three girls in Montana story on their short list. Kim correctly suspected that one of the women was the much older half sister of one James’ best friends in high school who was, eventually, the first girl I ever kissed (she is now college literature and women’s studies professor in a long term lesbian relationship–just so you know the sort of damage kissing me can inflict). Either I never told James about that or he forgot it. When I started to tell him about last week he cut me off as it being just too weird.

45 thoughts on “Two truths and a lie”