I took a former boss of mine, Marcello, to the range today. It was over two months ago that he had express an interest in going shooting for the first time but schedules hadn’t worked out until today.

Before we stepped onto the range we did the normal safety, grip, stance, and sight alignment stuff. I thing asked what he wanted to get out of this range session. His was a different story than I had ever heard before. He was a little bit scared of guns. He wanted to resolve that. He wanted to be either comfortable with guns or know for certain that it wasn’t for him. I’m sure nearly all of my readers know how this is going to resolve. 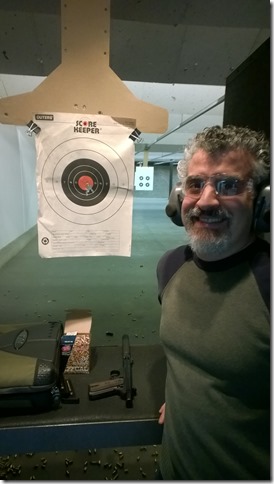 Here is just the bull’s-eye: 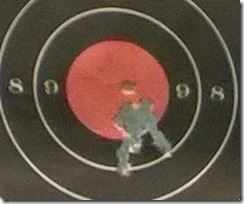 That is the result of firing his first 20 rounds of .22 LR from my Ruger Mark III into a target nine feet away. I verified on another target at 21 feet the sights are a little off. The gun is shooting a little bit to the right.

I would edit the picture to emphasize his smile but it is big enough to easily see in the picture above.

He kept probably 80% of the shots inside the diamonds and his speed rapidly increased.

I had him shoot a .22 LR revolver in single action mode from 15 feet. First dry fire, then live fire. He did great. Then I had him shoot double action dry fire about a dozen times. It looked pretty good even though you could tell he was struggling a little to get a consistent pause between the cylinder rotation and the hammer falling. The first cylinder of live fire was not very pretty. Everything was on paper but not many were on the diamonds. The second cylinder was much better. Nearly all were in the diamonds.

He moved on to 9 mm. Dry fire followed by a single round in the gun. He was a little bit surprised at the recoil even though I told him it would be a lot more. Then I had him shoot two rounds. All the shots were great and I had him empty a magazine into the target. Again all good and his speed was picking up as well.

I had him shoot a few rounds of .40 S&W through my STI. He could tell there was more recoil and it was a bit more than he wanted. He went back to the 9mm and soon his shots were getting a bit wild. Still on paper but not the tight groups on the diamonds like before. It had been nearly two hours on the range and I was pretty sure he was getting tired and maybe developing a bit of a flinch. I suggested he might be getting tired because of the shots weren’t as good as he was doing earlier. He agreed and we packed up and left.

I told him about professional training available from Insights offered at the same range, different range options in the area, rental guns, and competition. He seemed interested and told him I would be glad to give him more lessons. He just needs to let me know when and next time he needs to buy the ammo.

Winning. One new shooter at a time.