That is beyond disturbing! He should be locked up for child neglect! 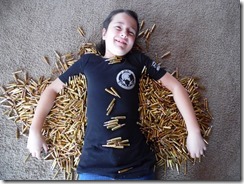 Teee Heee the first shipment of ammo from my sponsor Steel Ridge Ammunition showed up today !! So I decided to forget about snow angels and make an ammo angel instead !

VERY, VERY happy and cant wait to hit the range, thanks so much to the entire team at Steel Ridge Ammunition!

[Would they also want someone laying on a stack of Bibles locked up for child neglect? Or is it just the exercise of Second Amendment rights they find disturbing?—Joe]

13 thoughts on “Quote of the day—Sandra Gonzales”