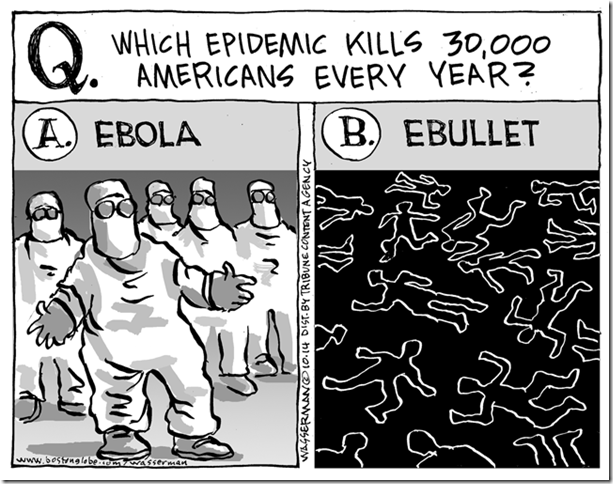 This is deliberate deception on the part of the cartoonist. Over half of the deaths by bullets are self inflicted and there is no gun specific preventative that could successfully reduce the number of suicides. Beyond that death by bullet is not an “epidemic”. Both the absolute numbers and especially the raw numbers have been dropping during the last couple of decades despite there being more guns and bullets in circulation, more people having easier access to them, and more people being able to carry guns in public.

The cartoonist furthers their deception by ignoring the potential risk of Ebola. Some strains of Ebola have a 90% death rate. Even if it were as low as 25%, as one might speculate it would be with first class medical care, with infection rates as low at 5% of the population this could result in four million deaths in a year in the U.S. You would be hard pressed to imagine scenarios involving bullets that cause that many deaths unless the government were to try confiscation of guns (H/T to Don K. for the link). Which one might imagine the cartoonist is suggesting. Hence we can tentatively conclude the cartoonist is advocating for policies which will increase not only the death rate from Ebola due to resources being moved from mitigation of the Ebola threat but increasing the probability there will be an increase in the the death rate from bullets. That demonstrates crap for brains. But as we can see it is common in their profession.

8 thoughts on “Gun cartoon of the day”