I’m arranging my post by the people who spoke in no particular order. The chronology and the topic of the panel in which they talked isn’t particularly important. I suspect there will be video available at some time but in most cases there was a lot of rambling and the information could have been presented much more concisely. Because of this you won’t see many exact quotes but my attempt to rephrase what I think is their position. I may get something wrong or miss something they believe to be important to understand their position and if they wish to contact me I’ll be glad to discuss and correct such errors.

I was annoyed with Fascitelli and tweeted about him a few times during the event:

Fascitelli said smart guns are similar to e-cigarettes. By this he meant, in part, the established industries are opposed to them and although they are safer some anti-smoking (and anti-gun) people are concerned that because they are safer they will lead to greater use/acceptance of conventional cigarettes/guns. He is opposed to smart gun mandates and realizes that has hindered development of the technology. He hopes that people on all sides of the issue can find common ground and reduce gun violence. He recognizes that gun owners and gun rights groups do care about innocent lives.

He strayed off topic some and said:

Some of the distortions and lies I found annoying included:

He and some others made a point that guns currently aren’t 100% reliable but “smart gun” critics demand the “smart gun” technology be 100% reliable. I suspect he is smart enough to know this is being disingenuous. We don’t want gun reliability to decrease to unacceptable levels. One failure out of 100,000 is probably acceptable in your self-defense hand gun. A 99% accurate smart gun means one failure out 100 and is not acceptable.

Depending on how you arrive at the numbers (see my email here) a gun that stops a kid from firing it 99.9% of the time may mean that if they try it 500 times they have a 60% chance of getting at least one shot off. 99% reliable may mean a 60% chance with just 50 attempts.

He hinted at a great divide in the anti-gun movement over smart guns. There is the obvious unintended consequence of mandated smart guns impeding development of them. But they also have concerns that if guns became safer to own guns would be more accepted in society.

This last point leads me to something else. I wonder if this contributes to their vehement opposition to armed school personal and sometimes even police being in schools. Are they concerned school shooting would decrease or stop and they would be less able to get traction on their anti-gun agenda? The same might be said of self-defense both inside and outside the home. Some, if not most, don’t really care that much about safety in general they just don’t want there to be guns and they even can admit this to themselves in some situations. 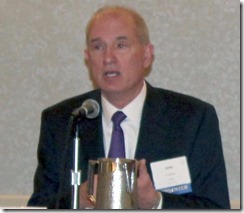 I really liked what Urquhart had to say and the way he said it. He was much more concise and to the point that the others and his points resonated with me. “Smart guns” aren’t ready for prime time. His deputies are very skeptical of them. You can see the mechanism of guns, you can take them apart, you can see parts are in need of maintenance, and you can clean and repair them. You can’t see into the electronics and software. You can’t know a failure is imminent with the electronics and software. A mechanical device is understandable.

This probably paraphrasing but instead of an exact quote, “A lock box isn’t going to save your life in an emergency but a gun may.” 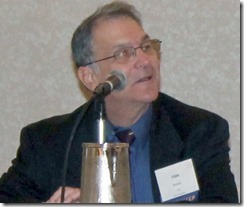 Allied Biometrix is licensing the commercial rights to a dynamic grip biometric device.

He thinks the phrase “smart gun” should be dropped. It should be a “user authorized gun” or something similar.

He sees potential for preventing accidents by children. He is adamant that thieves and terrorists (as suggested by one panelist) would be not be deterred.

While he is against legislation mandating the technology he would welcome legislation or at least some standards established before a gun could be put on the market. He doesn’t want a “bad-actor” to get into the market with a poor quality product that would trigger New Jersey type laws or sour the market for technology that might deliver on the promise of a high tech gun. “We can’t afford a 404 error code.”

He is also concerned about the liability issue. What if the technology fails and someone who is unauthorized to fire the gun successfully gets a shot off? Currently gun manufactures are shielded from such liability. But it seems unlikely a product that failed to do as it was advertised would be shielded. Even if it worked 99.9% of the time the liability from the 0.1% of the failures would be unacceptable. I suspect this is part of the desire for the standards body or legislation. If the tech passes some test criteria then they might claim it does it’s job good enough even though it is not perfect. I didn’t mention this to him but I think an argument could be made that it is similar to seat belts and air bags. They don’t work 100% of the time but they work well enough to save lives in many situations.

He claims his technology works about 99.9% of the time. I asked for details on how that was measured and he referred me to someone else. I called and sent an email yesterday but I have not heard back from them yet.

In one-on-one I asked about the price his technology would add to the gun. He dodged the question somewhat and said that survey’s showed “the sweet spot” was about $200 to $300 per gun. The parts would be considerably less than that but licensing, marketing, markup, etc. would bring it up to that range.

The CEO of Allied Biometrix wrote an article for USA Today last year which covers some of these points and more.

Tomorrow in part three I will cover what Robert McNamera had to say about “smart guns” and his product Trigger Smart which is based on RFID technology. Also Juliet A. Leftwich Legal Director, Law Center to Prevent Gun Violence, and Senator Loretta Weinberg, New Jersey Senate Majority Leader.