Sean Flynn and I woke up at an obscene hour this morning and drove to Olympia Washington for the rally to oppose I-594. As you might imagine from the number of QOTDs he has provided and the numerous posts that mention him it was a pleasure to have him as a companion for the drive.

At the rally last month I didn’t talk to anyone and only recognized Mike Vanderboegh (his thoughts on today’s rally are here). This time I saw and talked to a number of people including Barron and Janelle, Gay Cynic, Dave Workman (I didn’t really talk to him, just nodded “Hi!”, his thoughts on the rally are here), Anette Wachter and Charles, Alan Gottlieb, Brian Keith, and numerous other people I recognized.

I believe my speech went okay. Joel Connelly from the Seattle PI made mention of me in his blog post about the rally. He said I was “from a group called Boomershoot” which doesn’t really make any sense, but did correctly note I quoted Any Rand from Atlas Shrugged and The Virtue of Selfishness. I suspect he intended that to mean that I could be dismissed without further thought because in a couple sentences he said, “About the day’s only reflective remark came from State Rep. Brian Blake, D-Aberdeen, a Democratic legislator who actively opposed I-594”.

The text of my speech is “below the fold”. If you are a regular reader of my blog there isn’t any new material here.

Me giving my speech. Photo by Sean. 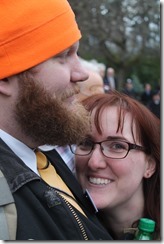 Some of the LGBT contingent. 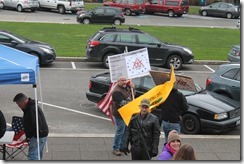 Some of the I will not comply contingent.

It’s instructive to see the selection of photographs the Daily Herald (Everett, Washington) posted of the rally. It’s all guns and images that reinforce the stereotypes the anti-gun people want to believe are true. They didn’t include any pictures of ordinary people standing around listening and applauding like what I saw: 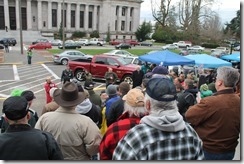 After the rally I visited the offices of my representatives then attended a luncheon with other activists and some lawmakers.

Speech written and delivered by Joe Huffman at I-594 rally in Olympia January 15, 2015.

The claimed purpose of background checks is to prevent “people who shouldn’t have guns” from acquiring them. This is a noble objective. It sounds so reasonable and “common sense” that I want to agree without giving it even a seconds thought. It’s such a great idea I think we should apply that to some other dangerous things. Let’s have “background checks” before people can purchase recreational drugs. Keeping recreational drugs out of the hands of people that would likely abuse them is just “common sense”. Right?

Oh! That’s right. We have something way beyond background checks in place for most recreational drugs. Our governments have banned them!

How’s that working out?

How long does it take the average high school dropout to find a way around the ban?

They probably can get all the recreational drugs they want within an hour anytime of the day, any day of the week. So how effective you think a “background check” would be in reducing the abuse of recreational drugs?

Now apply what you know about recreational drug laws to firearms. If the intention of background checks is to prevent the abuse of firearms by “people who shouldn’t have guns” it obviously will be, and is, a total failure.

But you can’t really fault them for their good intentions, right?

Here is what Daniel Webster had to say about that:

One of the exemptions to the background checks was for a temporary transfer occurring at a shooting range. The transfer was exempt:

if the temporary transfer occurs, and the firearm is kept at all times, at an established shooting range

But what does “kept at all times” mean? Does this mean for the duration of the transfer? Or does it mean the gun stays at the range until the end of time? We might be able to rule out “until the end of time”. But it could easily be interpreted as only applying to rental guns.

I think we can get a clue as to what was meant by this by a counter example. When they talk about an exemption for loaning gun to someone at an “organized competition” the transfer is exempt from a background check:

if the temporary transfer occurs and the transferee’s possession of the firearm is exclusively at a lawful organized competition involving the use of a firearm,

Notice the different language used? Had they intended for the first exemption to mean “the gun must not leave the range while in use by your friend” they would have used the other language.

One could argue that I am giving them too much credit. Maybe they weren’t smart enough. Or maybe they didn’t have the skill to use clear and consistent language. Maybe we can’t infer anything about their intent because these people are just simpleminded, good intentioned, fools.

I-594 was sponsored by people willing to spend millions of dollars for its success. Do you believe they would invest millions of dollars in the election but hire incompetent lawyers to write it? Or is it more likely the authors of this initiative were deliberately deceptive?

You might ask, “Why would they be deliberately deceptive to create such a stupid law that cannot possibly benefit the general public?”

Ayn Rand has the answer:

The only power any government has is the power to crack down on criminals. Well, when there aren’t enough criminals, one makes them.  One declares so many things to be a crime that it becomes impossible for men to live without breaking laws.

I claim the appropriate conclusion is the people who wrote I-594 want you to be in fear of going to jail every time you look at your gun.

If I-594 were a law infringing upon our rights to free speech or freedom of religion nearly everyone would get it.

Ideas are far more dangerous than tools. The Communist Manifesto, Chairman Mao’s Little Red Book, Mein Kampf, and even religious books propagated the ideas responsible for the murders of over 100 million in the 20th century. Yet we still recognize freedom of speech and freedom of religion are more important that the dark side of infringing these natural rights.

The connections between the First and Second Amendment are easy to make and very strong. When you talk to your friends, relatives, neighbors, and legislators make this connection. Let them know we are demanding our specific, enumerated, inalienable rights be respected. Just like our First Amendment rights.

Ayn Rand helps wrap this up:

When evil wins in the world, it is only by the default of the good. That is why one man of reason and moral stature is more important, actually and potentially, than a million fools.

I suspect evil people wrote I-594. I know I-594 had over a million good intentioned fools and appeasers vote for it. But we have hundreds of men and women of reason and moral stature here today. We are standing up against evil, fools, and appeasers. We must act reasonably and morally to defeat the implementation of I-594.

We must not let evil triumph.