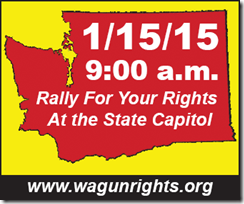 Join us in Olympia on Thursday, Jan. 15 for “594: Rally For Your Rights” starting at 9 a.m. The event will showcase Evergreen State activists showing their support for gun rights while at the same time contacting and hearing from and meeting with their local lawmakers to discuss their concerns.

In addition, Bill Burris, representing the Washington Arms Collectors, Gun Owners Action League of Washington and the Washington State Law Enforcement Firearms Instructors Association will appear, along with Joe Huffman from Boomershoot.
The Rally For Your Rights, the first 2015 Legislative Rally against I-594 is sponsored by Washington State Rifle & Pistol Association, I Love Guns & Coffee, the Citizens Committee for the Right to Keep and Bear Arms, the Second Amendment Foundation, Jews for the Protection of Firearms Ownership and the Washington Arms Collectors. The event will be attended by individuals from all of the previously mentioned groups, including WAFLAG, WaGuns.org, the Gun Rights Coalition and the Seattle chapter of Pink Pistols.

Protect Our Gun Rights chairman Alan Gottlieb also released a statement today in anticipation of the rally and the 2015 legislative session.

“I’m honored to have been invited to share the concerns of more than a million Washington gun owners who are now feeling the effects of all the problems with Initiative 594,” Gottlieb said. “This poorly-written measure, which is now being challenged in federal court, has already created confusion for legions of law-abiding citizens.

“I’m hoping to meet with my own state legislators,” he added. “I want them to hear from me not only as an activist but also as a taxpayer and constituent. This will be an important event because it will give concerned gun owners from all over the state a rare opportunity to meet their representatives face-to-face, while they are all gathered in Olympia.

“Like it or not,” Gottlieb – a Bellevue resident – observed, “gun owners have rights, too. We will not be silenced by elitist billionaires, nor will we quietly accept being treated as second-class citizens because we exercise our Second Amendment rights. I hope gun owners join us in Olympia to Rally for our Rights.”

Help will be provided at the rally for citizens in locating their state lawmaker and scheduling a visit to meet with them. Citizens may also locate their lawmaker by going to app.leg.wa.gov/districtfinder/ or contact the legislative hotline at 1-800-562-6000.