Years ago Ry coined a phrase we use when we are perplexed by something we thought we understood, “There aren’t enough columns on the spreadsheet.” This is usually used in the context of Boomerite.

Last week I realized there was another column on the Boomerite spreadsheet. Ry and I then chatted about it a bit and came up with a test plan. Last Friday I mixed and boxed three different recipes and performed the first set of tests.

The story is that we know Boomerite goes, essentially, dead after a week. But we don’t know the rate at which the degradation in sensitivity occurs. Because the quantities involved we make the targets for Boomershoot over the course of two days before the event. Most of the Friday production is used in the High Intensity, Precision Rifle Clinic, and Field Fire events (maximum range is 375 yards). Most of the long range (up to 700 yards) targets for Sunday are produced on Saturday. We expect targets which are one day old to still be close to the maximum sensitivity but we have never done detailed tests on one or two day old targets.

On Friday I created batches of Boomerite with various amounts of Ethylene Glycol while keeping everything else the same. The recipe we have been using for years uses 45 mL of EG. So I made targets with 35 and 55 mL of EG to test along with the usual amount.

I then attempted to detonate them with my .22 shooting CCI Stingers at various ranges. The 32 grain bullet is moving fast at the muzzle but it slows down quickly. By changing the distance from the targets I can get an estimate of the velocity required for detonation. Of course the velocity required for detonation is also very dependent on the bullet shape. Just because the hollow point Stingers detonate at a particular velocity doesn’t mean that the much more pointed bullet like this Woodleigh VLD 50 BMG bullet will detonated targets with the same or even significantly greater velocity. Here are pictures of the two bullets: 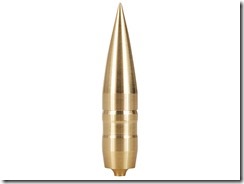 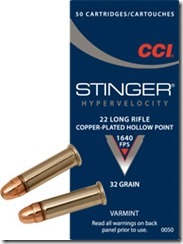 Yes, what I am saying is that both the bullet energy and momentum at the target are almost irrelevant in making the target detonate. For any give bullet type it is velocity dependent. For any given velocity the more pointed the bullet the less likely it is to detonate the target. We have literally seen multiple .50 BMG holes in a target while nearby targets hit with a .308 detonated reliably.

But since I’m using the same bullet we should (how many more unknown columns are there on our spreadsheet?) be able to determine the sensitivities of the different recipes over time.

The test results were “interesting.” All tests were done at a temperature of 33 F.

Within a couple hours of being mixed all recipes would detonate at 23 yards with a single hit from the Stingers and none of them would detonate from 29 yards. This figures out to about 1370 fps and 1330 fps.

About 26 hours later, after being stored at about 70F, none of them would detonate from 15 yards (~1425 fps). However they would all detonate with hollow point .223 rounds from about 20 yards away.

If the recipes made a difference my test did not reveal the difference. The deterioration while in storage is affected by still another column on the spreadsheet. My next hypothesis is that it is temperature dependent. I need to store a batch of our standard recipe at two different temperatures, say 30 F and 70 F for a day and see if there is a difference in sensitivity.

19 thoughts on “Another column on the spreadsheet”