In the comment thread here ubu52 demonstrates something I have been saying for a long time. Sometimes people literally cannot “hear” (or in this case read) your words without mapping them into something else which you did not say.

Here is an abbreviated version of the conversation:

ubu52: That’s ridiculous. That’s like saying all those who wanted to see Bush/Clinton tarred and feathered actually wanted to see that.

And it is ridiculous to think those saying, “Rats. Destroy Them.” actually wanted to see that. 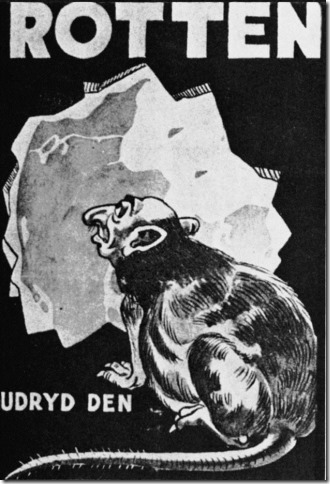 ubu52: [Repeatedly says she doesn’t get it. After completely spelling it out for her she finally says she gets it.]

Joe: [In six different contexts I ask, “Is it ridiculous to believe they are serious?”]

ubu52: So, who created it? Was it the occupiers? Was it someone Danish? Did they do it under duress or with their own free will? Was it created to mock the Nazis or was it created by someone who agreed with them? Without knowing it’s actual background, it’s really just a piece of 1940’s art.

Sometimes, creative people do things for effect. It has absolutely nothing to do with what they really think or feel. You are looking for some sort of deeper meaning to things that may not mean anything at all. (You’re also trying to compare them to people who are mentally ill, but that’s another topic altogether.)

You have such a black/white way of looking at things, it seems that you are incapable of seeing any of the grays in life.

I was asking if it was ridiculous to take the rat poster seriously. This was the work of the most famous genocidal group of all time targeting their most famous victims and she changes the subject to be something about “creative people” doing “things for effect” and claims I’m “incapable of seeing any of the grays in life.”

My question was not verbal, but in written word, repeated six times, and yet ubu52 ignores the question, changes the subject to be a question about the person who did the actual artwork, and tells me I have some deficiency in seeing the nuances of “just a piece of 1940’s art.”

Either she is deliberately trolling me to waste my time or chiefjaybob got it right, “In the end, they are all like Joan. It’s just a matter of degrees.”

58 thoughts on “This is what I’m talking about”