Here is an interesting chart (via Justin J Lehmiller) which is “data from the National Survey of Sexual Health and Behavior (NSSHB) [1,2]. The NSSHB was conducted in 2009 and involved a nationally representative U.S. sample of over 5,000 adults. In the table below, you can see the frequency of penile-vaginal intercourse reported by married men and women of different ages”: 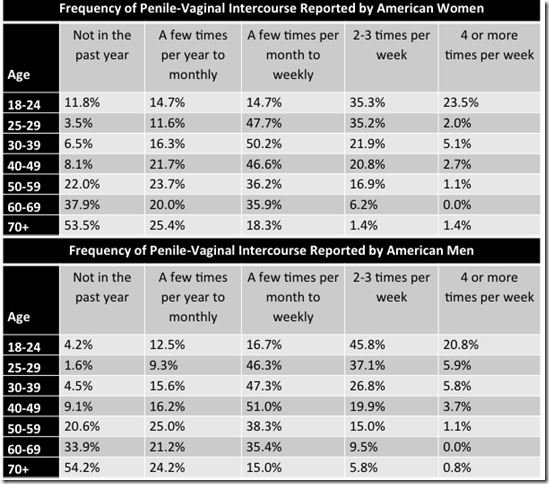 Obviously comparing yourself to others in your age group is interesting. But what I found most intriguing was comparing the frequency reported by the married men versus the married women.

It’s difficult to say for certain because any given couple may not fall into the same age range, but look at the frequency for women ages 18-24 and men 18-24. The percentage of married men in that age range who claim to be having sex 2-3 times per week is 45.8% but the percentage of women claiming the same frequency is only 35.3%. That is a difference of over 10%. What does this mean?

Any ideas as to what is really going on?