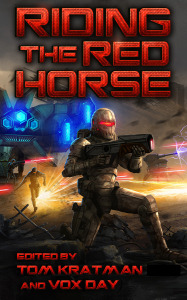 Authors writing for it include:

Wow. As I’ve said before… how the heck did I wind up in the same room with these guys?

Vox ran a short poll on who’s story was expected to be best/favorite military fiction when looked back on from some point in the future. In a bizarre outcome, I managed to come in 4th of 12 spots on the fiction writers. I’ve written only one novel, and I’m going against some big names, or at least names with a lot more history than mine, so I’m not sure what all it means, but I’m flattered, and I really hope I live up to expectations. Heck, I’d be thrilled to still be welcome, let alone considered in the top half of that group, a year or two from now!

One of the writers, Tom Mays, has read them all and said that he thought that mine and Steve  Rzasa’s were the best. It’s not particularly subtle or flashy, just a straight-up space battle, but apparently he liked it, and it ties in directly with The Stars Came Back.

7 thoughts on “Riding the Red Horse”