This is a slight refinement from something son James and I discussed a few days ago.

When debating which is a better political system we can point to many instances where anti-freedom systems (communists/socialists/progressives/fascists/theocracies/kingdoms/dictatorships/etc.) have been implemented and review the outcomes of those experiments. A significant proportion of those experiments have resulted in a tragedies of epic proportions. A short list from the last 100 years includes USSR, China, North Korea, Cuba, Venezuela, Iran, Nazi Germany, and Romania.

So what are the worst examples of a freedom based political system and how do those compare to the worst of the anti-freedom? I don’t know what my political opponents would give for examples. Would it be the United States? If so, then that little debate would be settled in two minutes or less. Why risk those tragedies when the worst you can do with a freedom based system is so much better?

Taking that tactic a little further we can also ask the question, “What are the best outcomes of a particular type of political system?” For a freedom advocate the United States surely would be near the top of the list with the probable additions of Canada, and many of the countries of Western Europe. I suspect the anti-freedom advocate will include many of the socialist leaning, but generally free countries, of Western Europe.

Rate each of the various countries on some scale from good to bad. This can be used to create a chart with upper and lower bounds of the outcomes. It might look something like this: 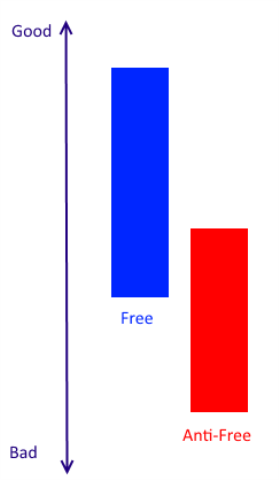 So, which system is the better choice? The answer is obvious.

This technique can be use to compare just about anything. In general compare the upper and lower bounds of the two (or more) proposals being debated.

Comparing gun control utopias to gun owner utopias will be left as an exercise for the reader.

4 thoughts on “Which is better?”