Barb and I visited the election watch party at CCRKBA last night. Here are some pictures: 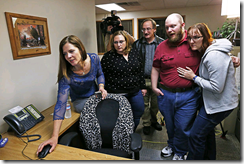 My version of nearly the same thing as above. We are not happy with what we see. 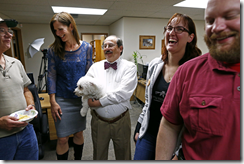 More than anything I was struck by the event was in the offices of CCKBA which could only hold a few dozen people. At a similar event for I-676 in 1997 they rented a event hall and hundreds of people showed up. This time we probably had almost as many media people as we did supporters. This time I knew nearly all the non-media people attending.

In many ways I-594 was identical to I-676. They both required paperwork and state involvement for simple, innocent, ordinary transfers of firearms. Both had deceptive and innocent sounding titles (“Mandatory background checks” versus “Mandatory safety training”). In both cases law enforcement were opposed. Yet we didn’t get the traction to come even close to defeating it.

I had lunch with Ry today and discussed why this might have happened. Our conclusions were twofold:

But how, beyond a simple gut feel, did I know it was certain loss?

A year or two after I-676 went down in defeat I had lunch with Alan Gottlieb. He told me our opponents were planning a new initiative. This was an initiative mandating universal background checks. CCRKBA had done their homework and tried many different concepts in presenting our opposition to such a thing. They did focus group studies with various sound bites and slogans. Nothing worked. It appeared inevitable we would lose such a battle. He didn’t signal this to anyone but close insiders. Publically he pointed out how we had bloodied their noses in the I-676 battle and how the people were on our side and claimed we could do it again if we needed to. But behind the scenes we were scared. Very scared. We had no hope of winning the battle if they attacked again.

I don’t know for certain why our opponents didn’t come back at us then but I’m glad they didn’t. As terrible as the passage of I-594 was yesterday it would have been much worse 10 or 15 years ago, before D.C. v. Heller. Today we have a decent hope of court protection. Then it would have been “a good first step” toward the massive restrictions they are so eager to inflict upon our specific enumerated rights that we could have today been in a situation like California or even Chicago is now.

I can imagine an alternate universe where a different history exists. In this alternate history our opponents were not quite so demoralized and/or timid and attacked us again a few years before the 2008 Heller decision and changed the course of gun rights in this country with a win in Washington state. With a model playbook for our opponents to impose their tyranny in most states, chill the exercise of our rights, we then lost mindshare, and we lost Heller. And then we lost it all.

We still have a lot territory to recover but with the Heller and other decisions behind us we are in a much stronger position to win it back. Let’s work toward making sure we still win the long battle even with this setback today. We must choose the fights and not let our opponents choose them for us. When we attack at their weak spots they must expend resources they could better use attacking our weak spots. For us I-594 was a defensive battle against our weakest point. We lost. We need to keep attacking their weak spots even if every attempt does not result in a win.

In Washington State we had been winning the defensive battle against background checks in the legislature and occasionally making successful offensive plays for many years. That sort of avoiding defeat, one year at at time, is incrementally less costly than winning an initiative measure but it is far less influential. Winning the initiative would have been more permanent. It probably would have silenced that issue for a dozen years in Washington State and perhaps have discouraged the billionaires from spending money in other states. But it also is an opportunity for us.

But some our most dramatic and long lasting wins have been in the courts. Shutting down the “collective rights” argument in the Heller decision resonates today and probably will continue for decades. If we can win this issue in the courts it will be more permanent and have greater benefit to people in other states being attacked. And because of the 10 to 15 year delay in taking this issue to court we have a lot stronger hand to play than we did then.

Support SAF and their “goal of winning firearms freedom, one lawsuit at a time.” If not them then some other pro-rights group with a history of accomplishment.