I recently tweeted this:

@CamEdwards @robdelaney @NRA @YouLikeAaron In a debate you lead with the best you have. They have crude insults. We have SCOTUS rulings.

It was in response to this tweet from rob delaney (@robdelaney):

This is how @NRA guys have sex. RT @YouLikeAaron:

The associated drawing is so crude I’m putting it “below the fold.”

This is entirely consistent with The Evolutionary Psychology Behind Politics: How Conservatism and Liberalism Evolved Within Humans. They are not data and logic driven. Anti-gun people are driven by emotions. They know that insulting and degrading people is what is effective on them. They therefore attempt to use this same tactic on us as their best weapon in a debate.

In a lot of ways you really can model them as not having matured beyond grade school. 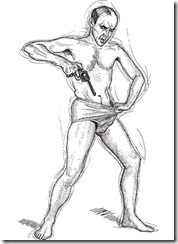 17 thoughts on “Crude insults are the best they have”