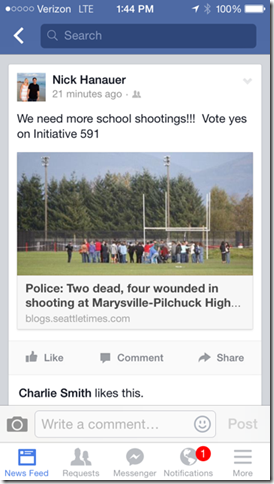 In addition to the moral bankruptcy, blood dancing, and exceedingly poor taste Nick Hanauer is a top funder raiser for I-594.

I-594 is the anti-gun initiative in Washington State which would outlaw many common and innocent acts related to gun ownership. One such example is my loaning a gun to Barb for the weekend so she could take a class. If I-594 were law we would have had to seek out a FFL, pay a fee, and fill out a bunch of paperwork for when I “transferred” the gun to her, and then again when she “transferred” it back.

I-591 is the pro-gun initiative which would limit Washington State to background checks to the same criteria as Federal background checks. And, assuming Hanauer is rational, then the only thing that could possibly be what he was referring to with I-591 being a issue in regards to school shootings is the following:

A new section is added to chapter 9.41 RCW to read as follows:

It is unlawful for any government agency to confiscate guns or other firearms from citizens without due process.

So, unless Hanauer thinks unlawful confiscation of guns is in the future, he has crap for brains in making the statement he did.

My conclusions is that with this post he just confirms the relationship between those opposed to our fundamental rights, crap for brains, and inherent evil.—Joe]

12 thoughts on “Quote of the 2014 November election—Nick Hanauer”