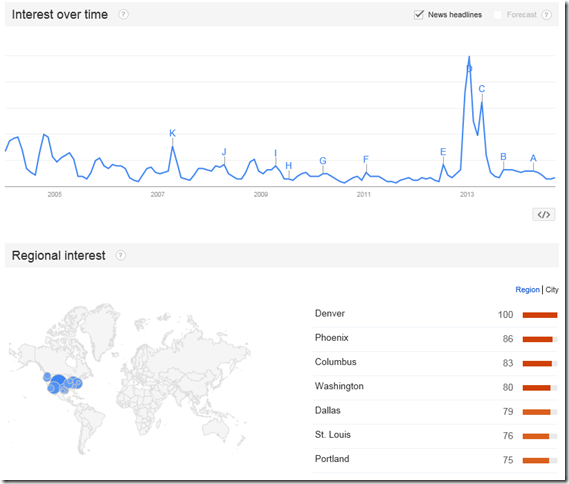 Other than the obvious peak we see stemming from the Sandy Hook Elementary shooting tragedy we can make some more inferences.

I find it odd there are so many Texas cities (follow the link and scroll down for Austin and Houston) in the top ten for interest in gun control. I have no speculation for that result. Anyone?

We are winning. Look at the level of interest in 2004 to early 2005 range. The lowest level then was greater than anything we have had in the last few months. And the interest from 2004 until December 2012 was steadily declining. We appear to be getting back on track to that decline.

You can see why the anti-gun people dance in the blood of the victims. Their message becomes far more important when there is a mass shooting.

That coincides with Bloomberg’s $50 million push for gun control. Bloomberg may be our enemy. But as enemies go he is one of the easiest to demonize.

10 thoughts on “Interest in gun control”