In preparation for the delivery of the 5000 pounds of fun this last weekend I, as Barb expressed it, rearranged some dirt and rocks around Boomershoot Mecca.

Here are the before and after panoramas:

It’s a little difficult to judge what was really done because in the first picture there are a lot of tall weeds blocking the view of the dirt and rocks.

Here are some pictures of one of the new piles of rocks to give you a clue:

I am a little concerned that I might have created conditions for some major snow drifts near the door to the shipping container. Drifts have formed before but they weren’t large and were of little concern. If the weather conditions are just right I can see the wind now dumping major amounts of snow in front of the door.

Most of the rocks were moved with the bulldozer but hundreds of the smaller ones were moved by hand. I was unable to smooth the dirt out with the rocks embedded in the soil. The really large rocks I could move with the dozer. But baseball sized to almost basketball sized rocks were tough. They would lift the blade if I didn’t apply downward pressure. And if I applied enough pressure to move the rocks I would move large amounts of dirt at the same time. I spent a couple hours moving them by hand and then smoothed the ground with the dozer.

The end result was a lot more area for vehicles to maneuver and park on the east end of the shipping container: 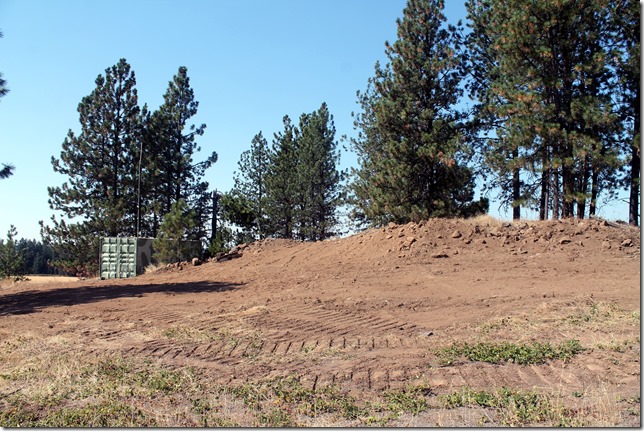 There is a much nicer path from the parking area on the north size of the hilltop to the shipping container now: 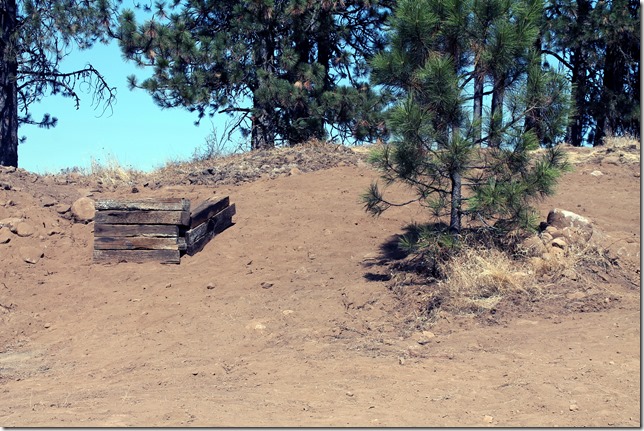 It used to be weeds and a maze of rocks to navigate.

I came up with and tested a new equipment wash station: 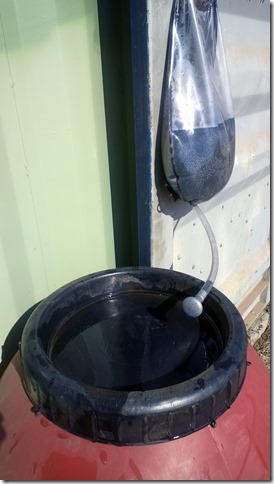 The bag of water is a three gallon solar shower. After about two or three hours in the summer sun it has enough hot water to give at least two people a decent shower. It also does a nice job of delivering hot water for washing the chemicals off of the mixing equipment. The barrel top works as a shallow sink. This is so much better than bending over some railroad ties on a rocky hillside and washing in cold water. The hot water will dissolve the chemicals much better as well as being more comfortable.

I also finally got the eight foot long grounding rod to what I consider the final depth:

I’ve been pounding on this rod when I visit for years.

I also leveled a much larger area for tents and sleeping bags on the very top under the trees. It’s hard to tell from the pictures. The lighting was so high contrast that you can’t really see how level and smooth the area is but it’s really nice when you see it in person even if it looks like crap in the picture: 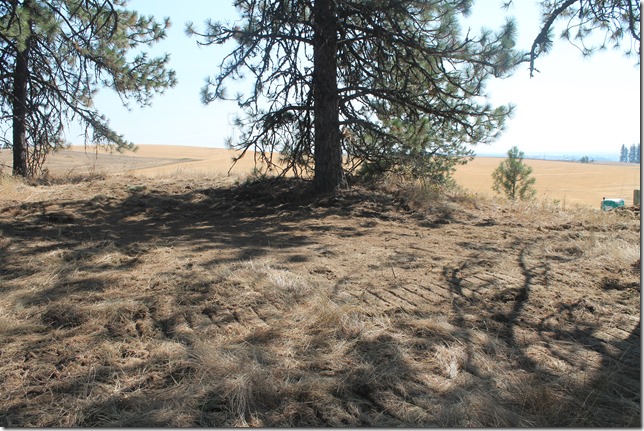 Later this fall or early next spring I’ll plant all the bare dirt to grass with the possible exception of some of the area directly in front of the shipping container doors. I’ll put gravel there if I get the chance.

8 thoughts on “Rearranging dirt and rocks”